If you haven't seen this video yet, check it out.


Eric Maundu is an engineer in West Oakland who uses Arduino controllers to automate his aquaponics gardens. It's a pretty impressive setup in an otherwise barren industrial lot.  A friend of mine, Donna Raef, visited with Eric at his garden in January.  She had this to say about her visit:

"He is dedicated to technology more than aquaponics so it took me a bit off guard when at first he said he didn't care about farming or aquaponics. He only has one aquaponic system going and he monitors it through a computer system that tracks all kinds of levels, takes pictures, etc and compiles the data. It was a very impressive system.  His philosophy seemed to be geared toward educating kids about science, math and technology through aquaponic systems with this kind of data collection. He has after school programs and other educational programs in some of the schools. It was a really good way to see farming/food production from that angle. He was pessimistic about just using aquaponics alone to inspire people to grow food or to get kids interested in it. His focus was really on the technology of gathering information and trying to make it more productive through technology. I am going to put him in contact with the greenhouse I worked at in Amarillo and hopefully he can come out there and teach the kids some stuff about the technology/aquaponics--he seemed really interested in that idea. I forgot to take a picture, sorry!"

Thanks Donna!
Posted by dirkmcgurk@gmail.com at 9:00 AM No comments:

I came across this story on reddit.com.  The nation's largest vertical greenhouse is located in Chicago, IL, and they're using aquaponic gardens!  It's pretty awesome that aquaponics is being used on such a large scale.  It really reinforces my goals of making a career out of spreading this amazing process.  The photographs from the farm are stunning.  Seeing such a huge aquaponics system climbing 20-30 feet vertically in an indoor facility is truly inspiring.  The facility is run by FarmedHere, who's name you may have already seen in Whole Foods if you live in Chicago, IL. 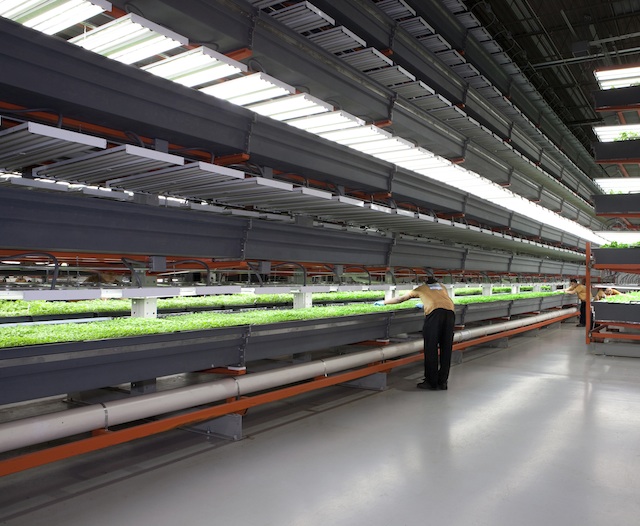 "Nearly 100% of supermarket lettuces in the US come from just 2 places, near Salinas, California in the summer, and Yuma, Arizona in the winter.  These lettuces travelled 3000 miles to reach the local grocery store here." - Paul Lightfoot, CEO, BrightFarms

Well, that's not the case in Chicago, anymore.

New Growth in my Windowfarm!

I was pleasantly surprised to see my strawberry plant flowering yesterday! 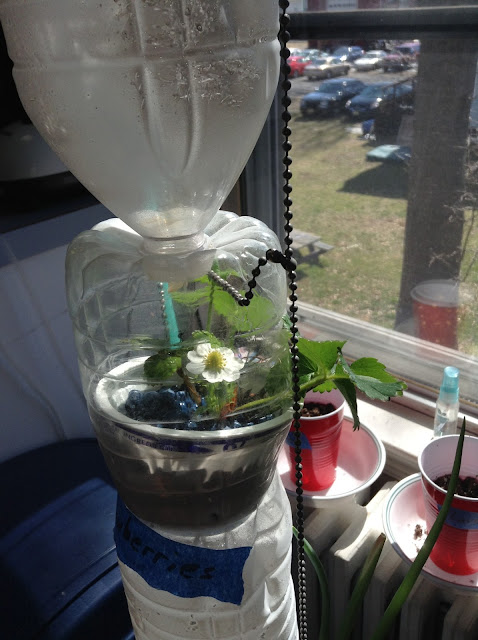 I'm also seeing some growth in the Basil planted in the windowfarm. 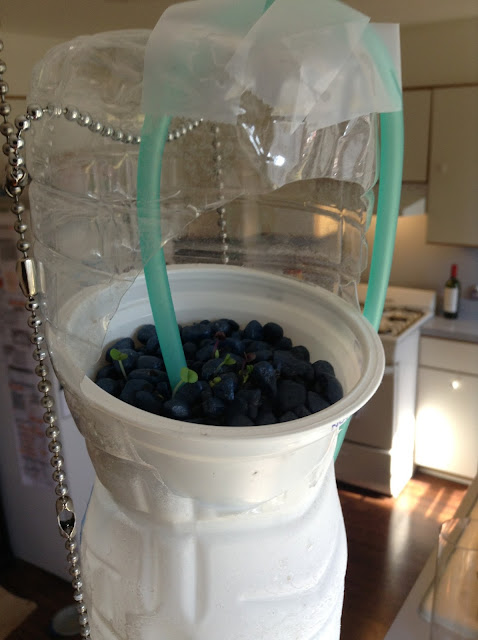 The green onions are doing really well, and I cut one to mix with my eggs for breakfast this morning.  This marks the first time I've eaten anything that I've grown.  Awesome! 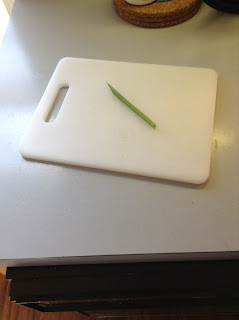 The lavender on my windowsill is also starting to grow. 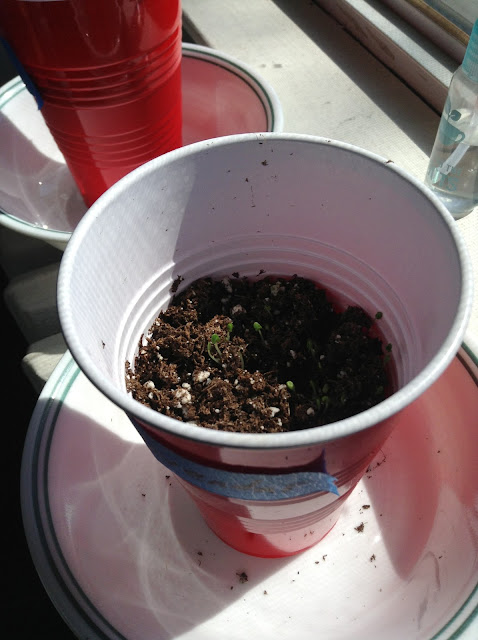 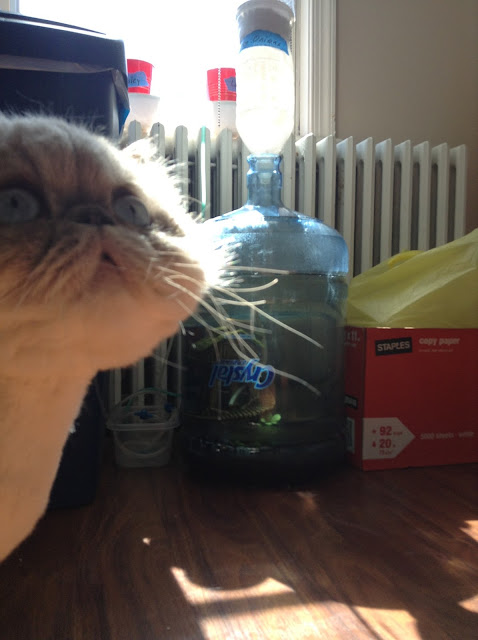 Posted by dirkmcgurk@gmail.com at 1:30 PM 2 comments:

I recently found out about a New York City based company called BrightFarms that has a really cool, unique business model.  They "finance, design, build and operate greenhouse farms at or near supermarkets."  So basically, they're creating hyper-local food sources for various supermarkets. 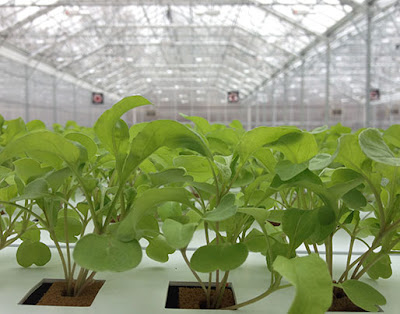 They're working with McCaffrey's Supermarket in Yardley, PA, which is only about 20 minutes from my house.  I drive by the greenhouses on the way to work every morning.  This is pretty darn exciting to see something like this happening in my area.  I'm planning on moving to north New Jersey, and then to NYC in the next year or two, and I'd love to try to work with BrightFarms.  They're doing great things!

Can you imagine supermarkets across the country with greenhouses on the roofs?  How cool would that be? 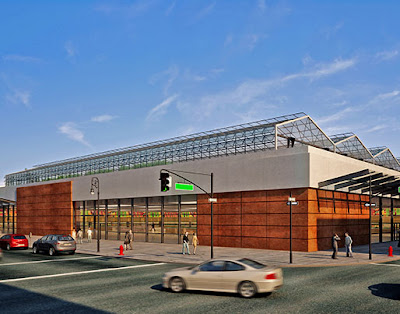 Posted by dirkmcgurk@gmail.com at 10:00 AM No comments:

Tonight I had time to stop over +Evgeny Pogorelov's house after work and we assembled the frame that will hold our 105 gallon aquaponics farm for his bedroom.  The total cost so far is about $250, and we still need pumps, piping, media, and fish.  Estimated cost is about $350 for the entire system.  It is also larger than we need, so we could fit a second 55 gallon fish tank, and a second 50 gallon stock tank on the frame.  Pogo moves out of his apartment in September, so we'll decide where it will go, and if we'll upscale at that point. 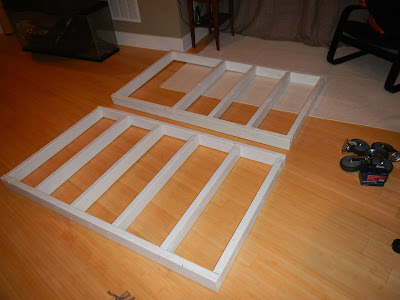 We started with the shelves that we made last weekend, painted and ready to be assembled. 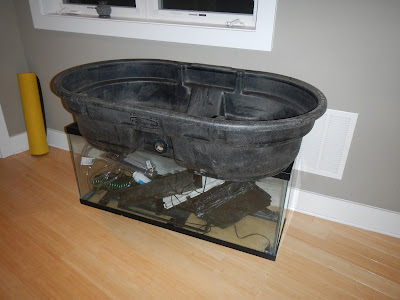 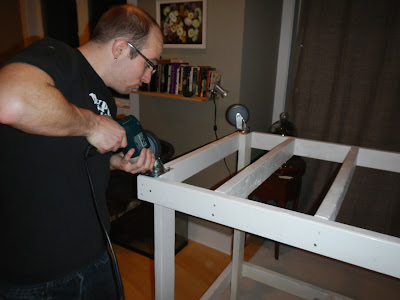 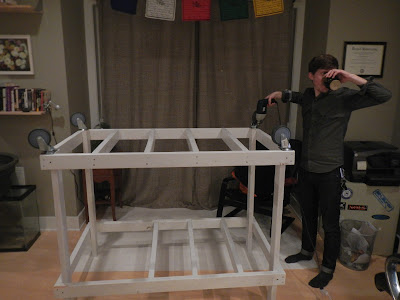 Not too difficult at all 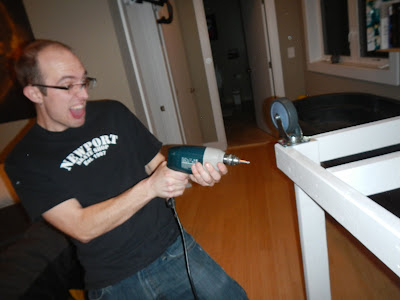 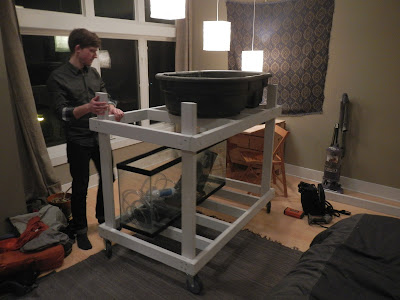 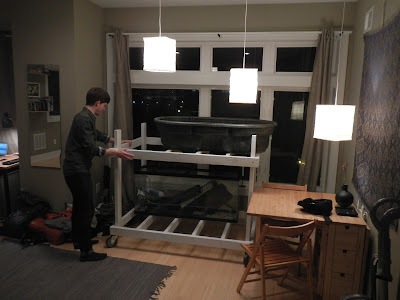 Moving it into it's future home 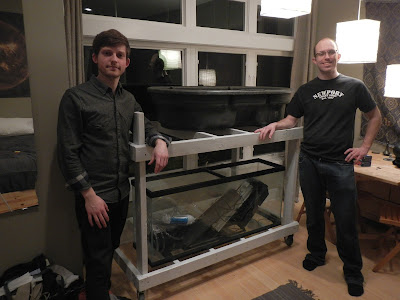 The frame was build larger than necessary to allow us to make the system larger in the future.

Posted by dirkmcgurk@gmail.com at 12:03 AM 3 comments:

Since I've started learning about aquaponics, one of the coolest technologies that I've seen is the ZipGrow towers, made by Bright Agrotech.  They're a way to grow vertically, with hydroponics or aquaponics.  The idea looks very simple.  It's one of those, "Why didn't I think of that," kind of ideas. 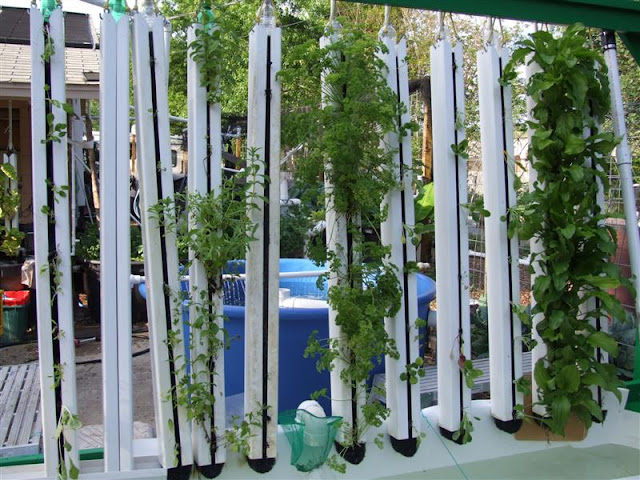 The ZipGrow tower looks like a square fence post with a 2-inch slit cut down one face long-ways.  A long strip of polymer foam with very large pores is folded in half, and inserted into the post.  The plants roots grow in between the folded foam, and water drips from the top of the post down the foam, watering all the plants roots.  They have some amazing results with these things on their farms in Wisconsin.  Good for these guys! 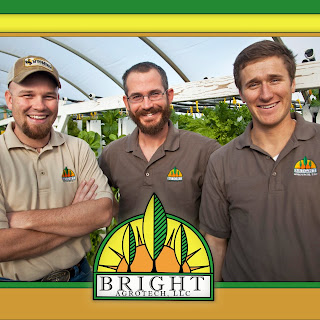 The Valhalla Project has some great ideas!

I was browsing kickstarter a few days ago and came across this fundraiser for "The Farm of the Future."  The group behind the project calls themselves Valhalla. 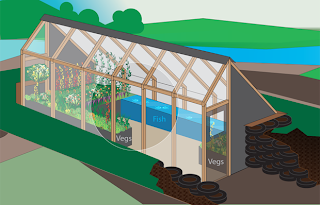 "We are Valhalla -- a group of people dedicated to making sustainable communal living mainstream and inspiring people to help create the beautiful world our hearts tell us is possible."
I like their mission statement and in particular, I thought their idea of combining an earthship structure with a greenhouse was really cool.  Check them out! 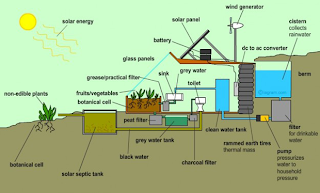 Posted by dirkmcgurk@gmail.com at 5:54 PM No comments:

Here's a great summary of how aquaponics works! 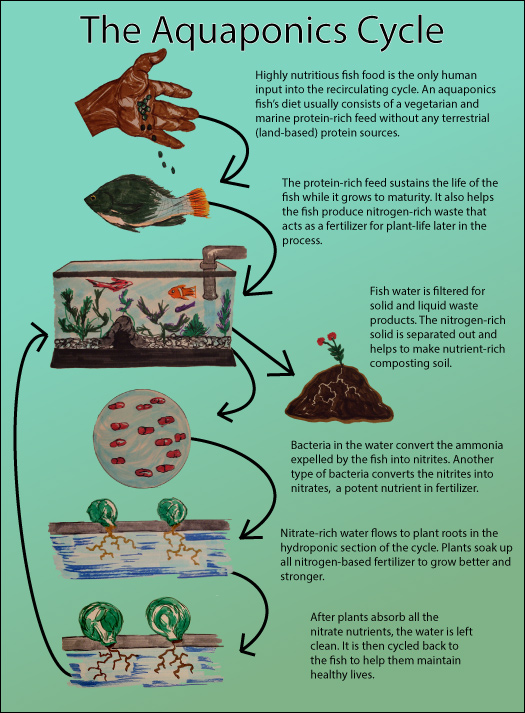 So, I've previously written about my windowfarm that I'm building.  I'm also currently working on a 105 gallon system for my friend +Evgeny Pogorelov's apartment.  It's going to be a basic flood and drain on a timer.  We have a 55 gallon aquarium, which will feed into our 50 gallon stock tank grow bed.  We're currently planning to have about 5-6 tilapia, and grow all kinds of veggies.  I'll update with pictures soon.

Right now, we're constructing the frame that will hold the system.  We've cut all the wood, and painted it all white, and now we need to assemble and put it on wheels for easy mobility.  The next step is plumbing; we'll use a 200 GPH pump.  We're hoping to stay away from using PVC due to conflicting reports about PVC leaching chemicals into water over time.  However, this may only apply to soft PVC, not hard PVC.  We need to do a little more research before we buy pipes.

Here's what Pogo wrote to me about PVC in farming systems:

Found some resources that cite PVC as leeching dioxin, pthalates, and other toxins into water / food. Definitely want to avoid PVC piping in any operation we start. The safer alternative is biodegradable EVA plastic.

"See: www.aaa.dk/pvc PVC plastic is an environmental and public health hazard because dioxin and other persistent organic pollutants can be emitted into the air, water and land during its manufacture and incineration.

In addition, PVC products can leach toxic additives during use, and thus may harm patients receiving certain medical treatments.

PVC has come under scrutiny by the European Commission since 1997 resulting in the release of the Green Paper in July 2001 that highlights the dangers associated with its disposal, and in April 2001 the European Parliament adopted a resolution calling on the Commission "to introduce rapidly a policy on the replacement of softPVC, in so far as the current risk analysis of phthalates indicates that it is desirable to reduce the exposure of people and the environment".

These concerns have led increasing numbers of health care providers to search for alternatives. Grenaa Central Hospital, Denmark, substituted 95 percent of its PVC-products with safer alternatives without compromising safety and care, and found many of the alternatives to be more cost effective."

Posted by dirkmcgurk@gmail.com at 1:44 PM 2 comments:

I added more plants to my windowfarm today and fiddled with the airlift to get it working a bit better.  The water wasn't syphoning out of the fish tank very well, so I got the syphon working better, and now more water is flowing.  I added some a rosemary plant and a strawberry plant.  The green onions from a week ago are still growing strong.  I started them from supermarket green onions.  I kept the root after using the green part in a recipe, and the root grew more green onions!  I'm also trying to start some basil and parsley from seeds in the fish rock media.  I'm pretty sure that I've seen other people having success with starting from seed directly in the grow media.  Here's the update video: 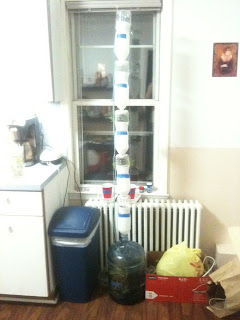 The Windowfarm in front of my kitchen window. 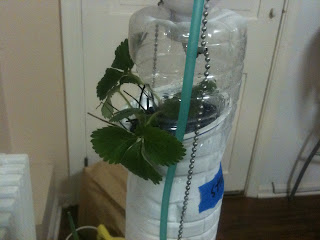 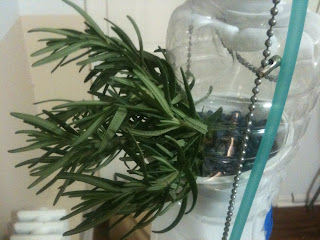 
I've also had some lavender seeds laying around, so I planted them in the potting soil left over from the strawberries and rosemary.  When that grows some roots, I'll switch it out with the green onions, which should be done growing by then.
Posted by dirkmcgurk@gmail.com at 10:15 PM No comments:

This is my first post for this blog.  I posted this youtube video about a week ago after I finally got my aquaponic windowfarm garden set up in my kitchen.  I followed the windowfarming plans available online.  I added a 5 gallon water cooler jug at the bottom for a fish reservoir   I have a betta and an african dwarf frog in the water jug.  I'm not sure that they'll provide enough nutrients for all 5 plants, but we'll find out.  I'm planning on using mostly herbs, as they will need less nutrients than fruiting plants.  Here's the video:


I want to use this blog to track my progress with this garden, and the other aquaponic projects that I'm working on.  I hope you'll enjoy my posts, and maybe you'll learn a thing or two (or maybe you can teach me a thing or two).
Posted by dirkmcgurk@gmail.com at 10:04 PM No comments: