Wow, I can't believe I just found out about this.  While reading about the Riverbend Environmental Education Center's planned aquaponics facility, I found out that there's a 10,000 square foot aquaponic basil farm in West Chester, PA.  I work in West Chester, so I'll definitely need to check this place out and try to get a tour on my lunch break one of these days. 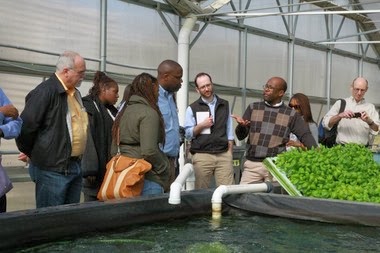 I recently saw in my Google Alert email for aquaponics that there is a huge aquaponics education facility being built in Gladwyne, PA, just outside Philadelphia.  The Riverbend Environmental Education Center is trying to raise $800,000 to build a 4,380 square foot greenhouse and aquaponics facility.  The Riverbend Environmental Education Center conducts programs to educate kids and adults about environmental issues and solutions.  The aquaponic facility will be staffed by local Veterans.  I can't wait to visit and hopefully I can get involved with setting up the facility.  Super cool! 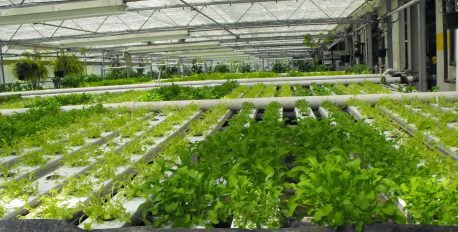 I'm currently taking a lecture series offered by Rutgers University as part of Annie's Project, a project to educate women in farming (it's open to guys too).  It's once a week in person for 3 hours (including a free dinner), and a 1-hour weekly webinar.  This years 6-week class is focused on greenhouse management, including creating a business plan, plant choice, pest control, etc.  The class is a great opportunity to network with other local growers and enthusiasts.  There are people in the class who have greenhouse facilities that they don't know how to take care of, others who don't have any property, but have a lot of knowledge or interest in farming, and others who are very experienced and already have a farm business.  I've already met other doing urban farming, and aquaponic farming.  Some of the cool things I've learned about from just the first class are AgPlan (a free Agricultural Business plan tool from the University of Minnesota), and performing SWOT analysis to consider your strengths and weaknesses.  This is a national organization, so check out Annie's Project to see if they offer a program near you!

Here's a link to some archived class footage.

Recently, Bright Agrotech hosted a webinar for people interested in getting into commercial aquaponics.  Bright Agrotech is a business in Laramie, Wyoming co-owned by Dr. Nate Storey, who is one of the best sources for information about aquaponics.  He posts tons of educational videos that have helped me tremendously. 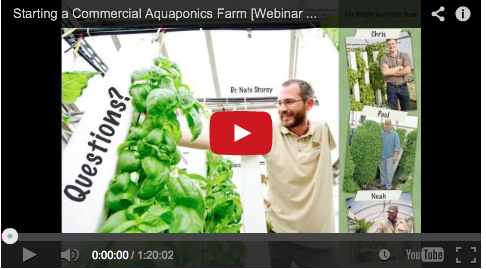 Back in November, I found out from a friend that there was an earthship being built in north-Philadelphia.  It turns out that it wasn't exactly an earthship (doesn't follow all the earthship design principles), but an earthship-inspired structure which was being built on a vacant lot to serve as a teaching space for children in the area.  If you're unfamiliar, an earthship is a structure built from recycled materials that uses natural systems to light, heat, and insulate the building.  Wikipedia has a nice description:  http://en.wikipedia.org/wiki/Earthship.

Philadelphia has had lots of funding troubles with the public education system recently, and some locals wanted to build a space where they could teach local kids about gardening and self-sufficiency.  They were also working on creating a community garden in the lot.  It was pretty awesome. 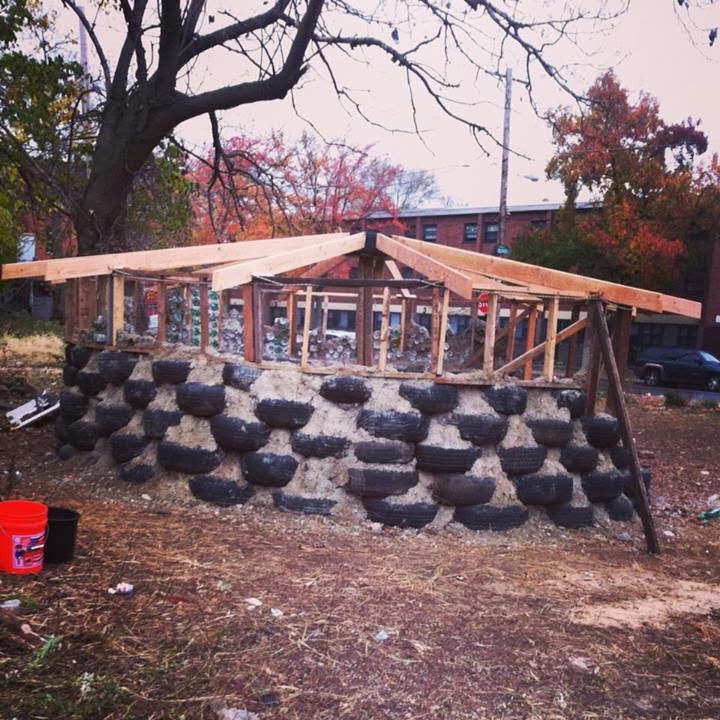 My girlfriend and I got to the site eager to help.  We were greeted with smiles, and put to work mixing concrete, and filling it into the gaps between stacked tires.  They had already pounded dirt into the tires, and stacked them in a circle to create the foundation for the structure.  The wooden frame for the windows and roof was being constructed while we placed the concrete.  A lot of the people volunteering were from the local community, and many just came from around the city to volunteer.  It was really great seeing people enthusiastic about working towards a common goal of creating a better community, without expecting anything in return.  Here's some pictures of the progress made over the winter. 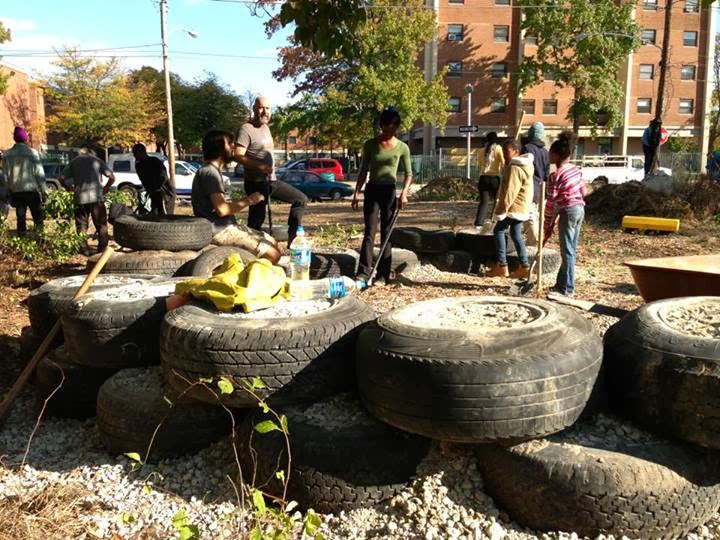 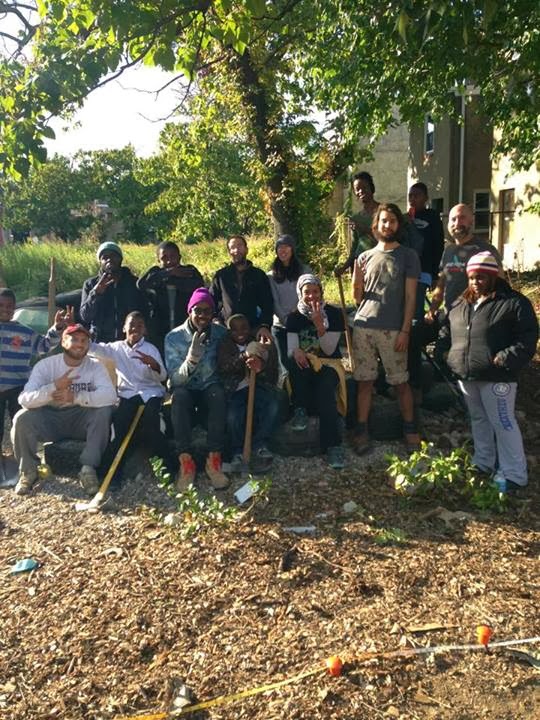 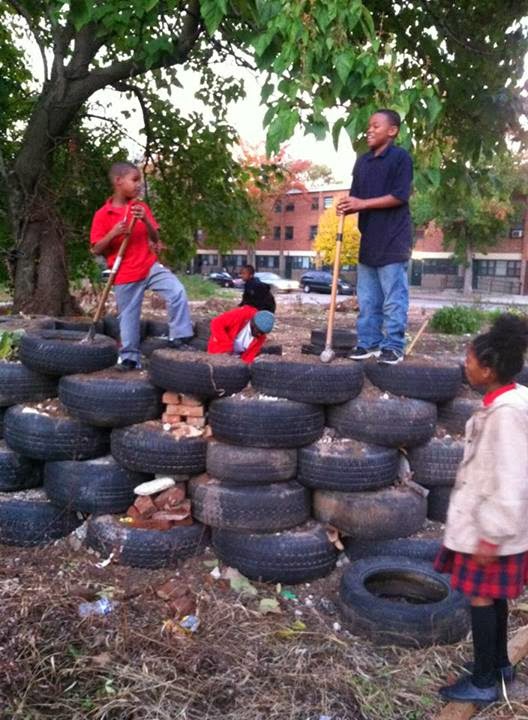 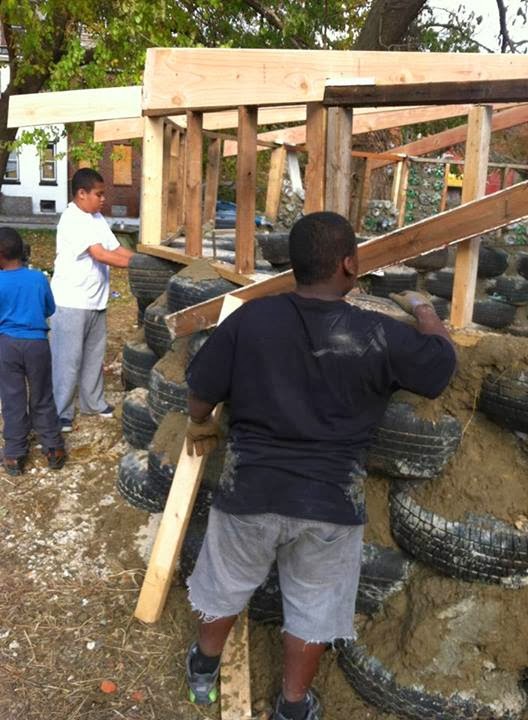 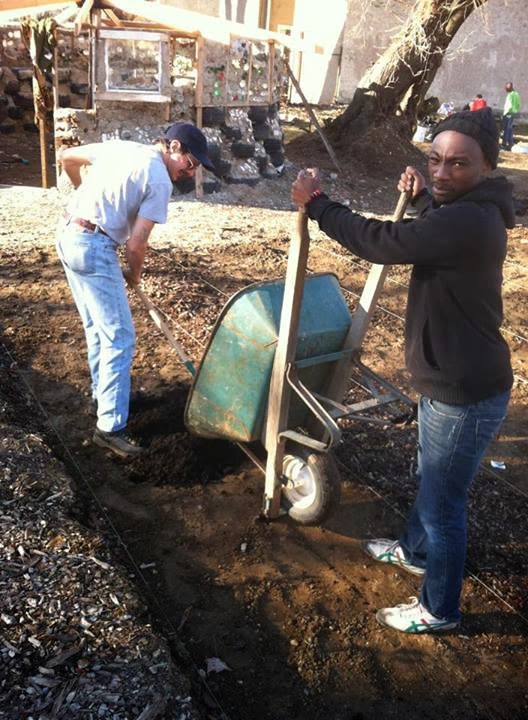 I haven't had a chance to get back to help on any of the work days since then, but I want to give a huge shout out to all who were involved that day (many of whom are still working on this project): Tommy Joshua, Elissa Millman, Greg Alden, Benjamin Schmitt, Matt Bennett, Evgeny Pogorolev, Lana Kaminker, Bonzai Holmes, Dusty Hinz, Maaman Rezaee, Brian Mungavin, and anyone else that was there that may not have met, and anyone who helped out with any of the other work days that I couldn't make it to!

Here's the facebook page for the park where you can find out about future work days, and get involved with this awesome project:  https://www.facebook.com/NorthPhillyPeacePark
Posted by dirkmcgurk@gmail.com at 9:43 AM No comments:

A few years ago, I became interested in mushroom cultivation.  I've grown oyster mushrooms in the past, and I just harvested some Lion's Mane mushrooms that I got for the holidays.  I've heard some pretty cool things about these mushrooms.  Apparently they can increase you memory and mood.  Paul Stamets is a mushroom expert with some interesting thoughts about Lion's Mane.  You may have seen his TED talk, 6 Ways Mushrooms Can Save The World.

I saw Paul give a talk about mushrooms at Burning Man this past year.  The talk was very interesting, and one of the things he mentioned was that Lion's Mane promotes growth of cells in the brain.  He also mentioned that they taste like lobster when sauteed with butter.  I had to give it a try!

I prepared the grow kit around December 27th, and I made a mushroom fruiting box a few days later.  The fruiting box is a large clear bin with holes drilled in it, and moist perlite at the bottom.  This keeps the humidity high so that I don't have to mist the bag as often.  I still fan out the box once or twice a day. 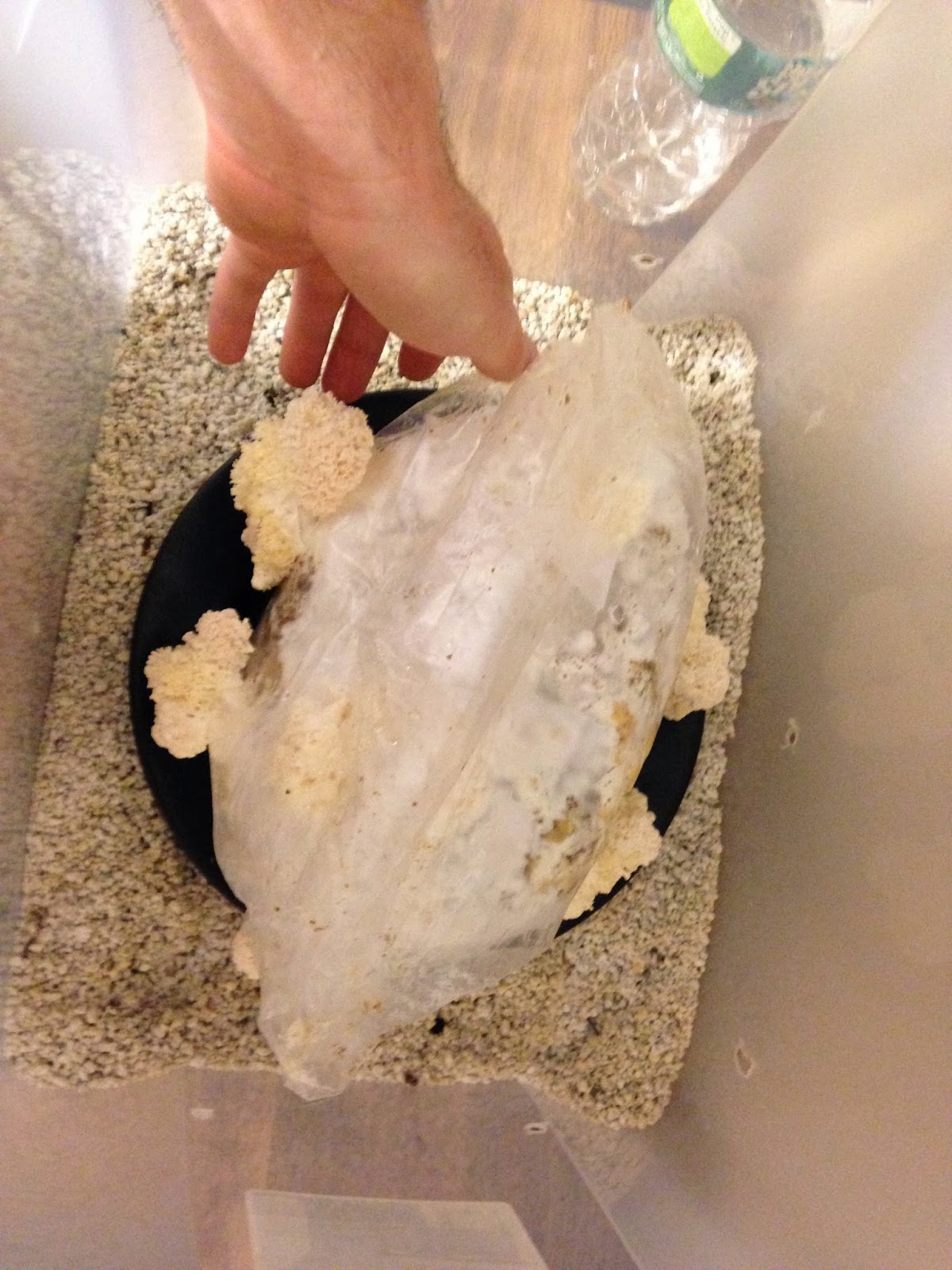 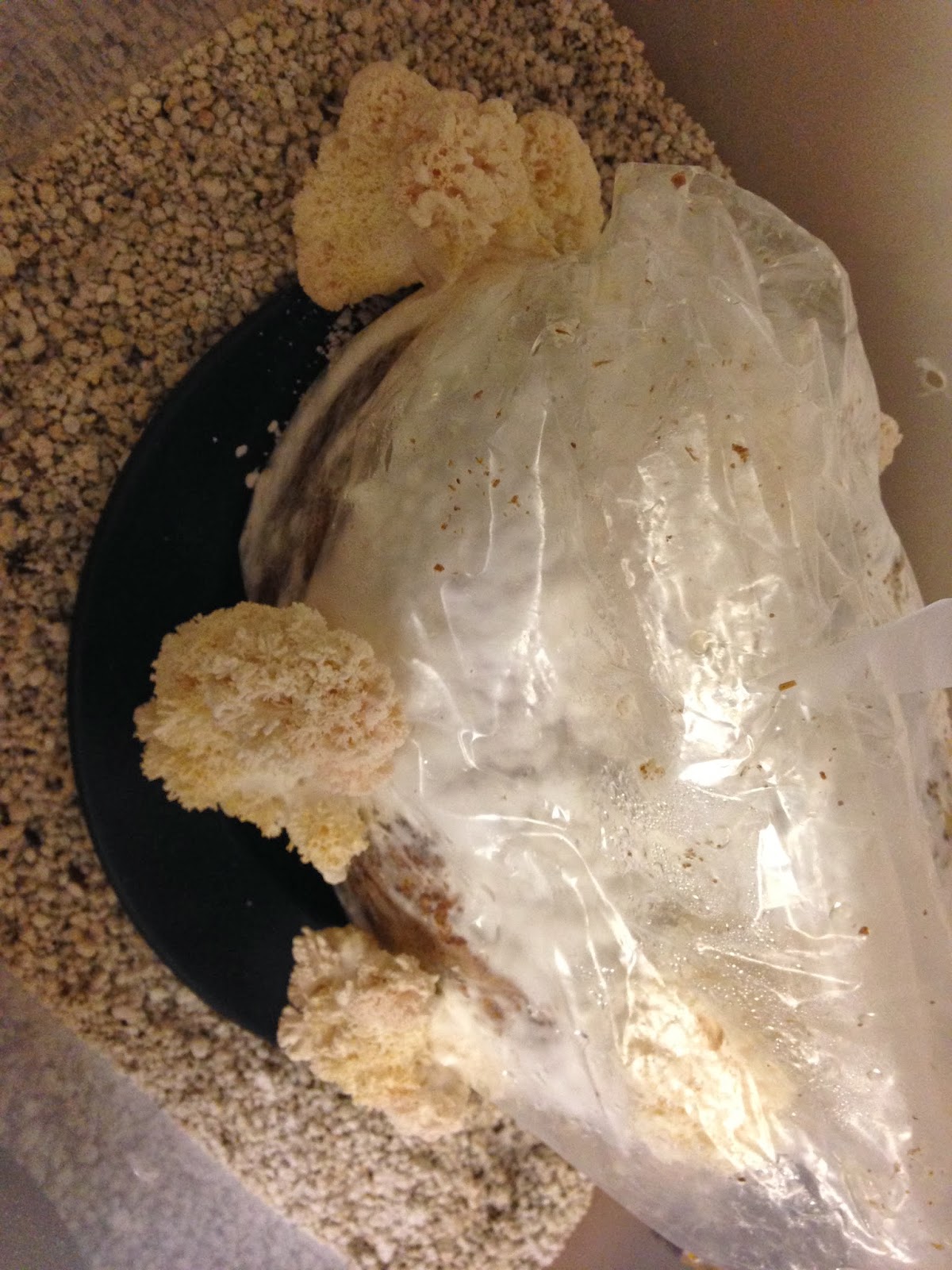 I harvested on Jan 20th 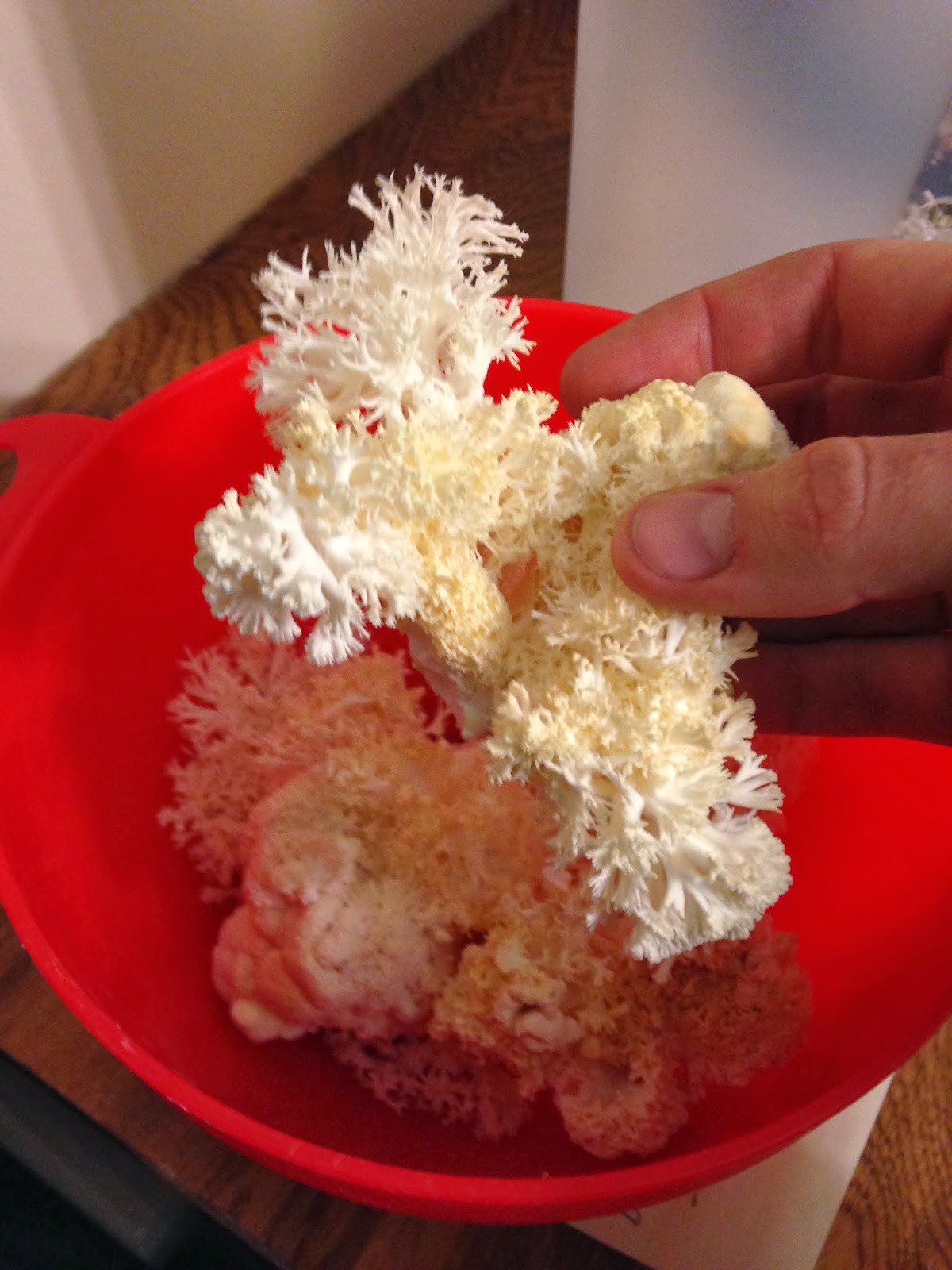 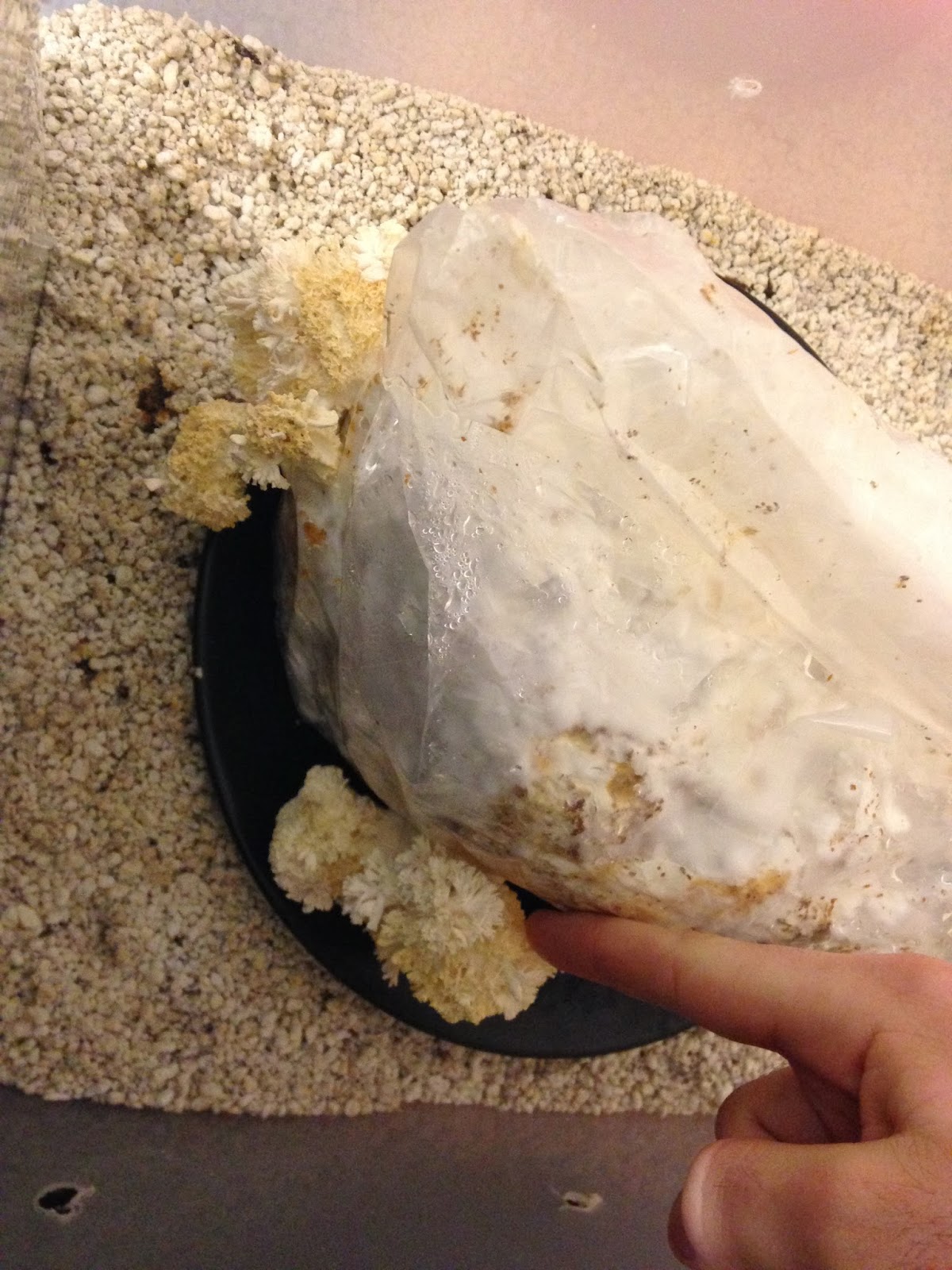 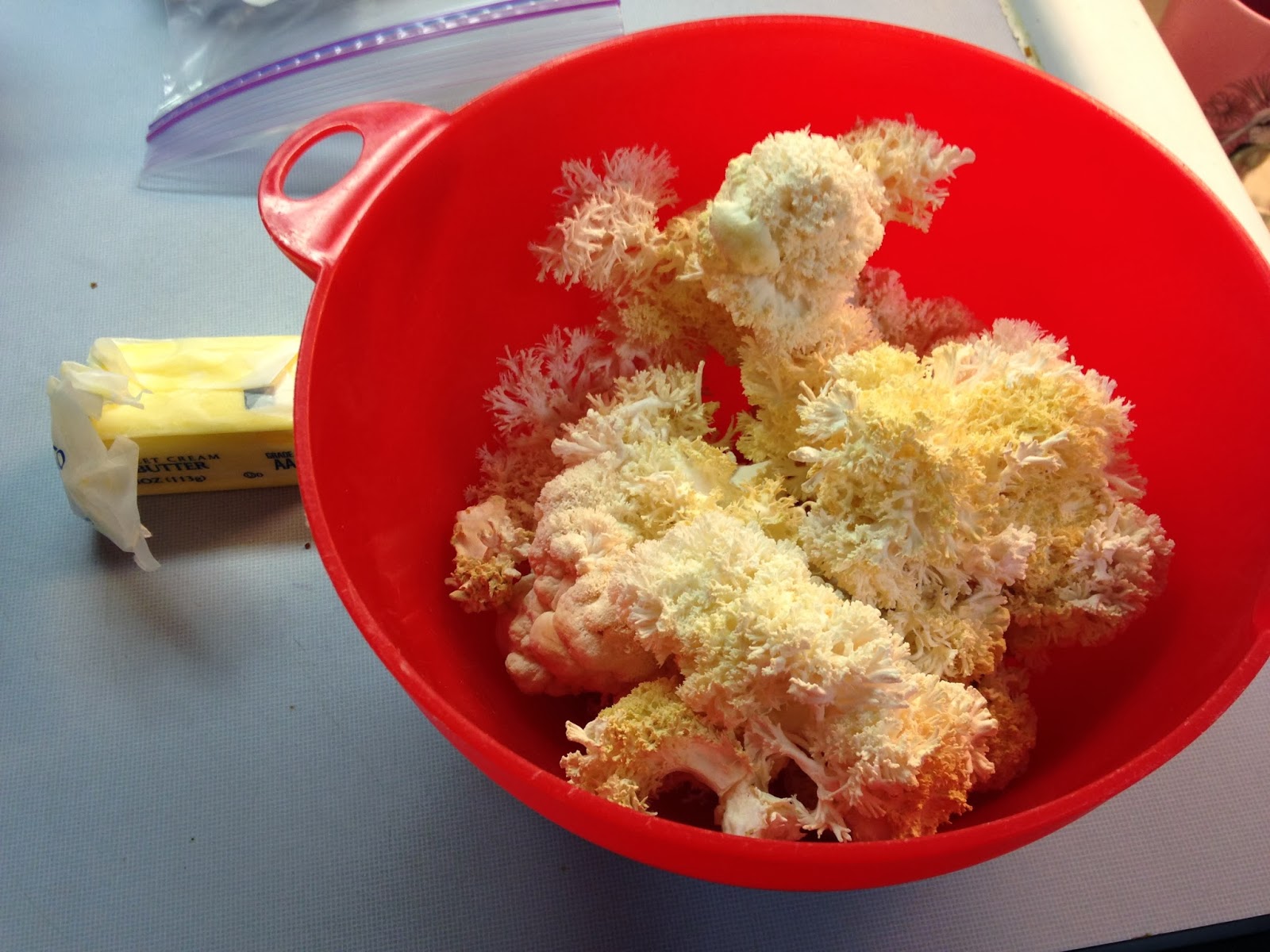 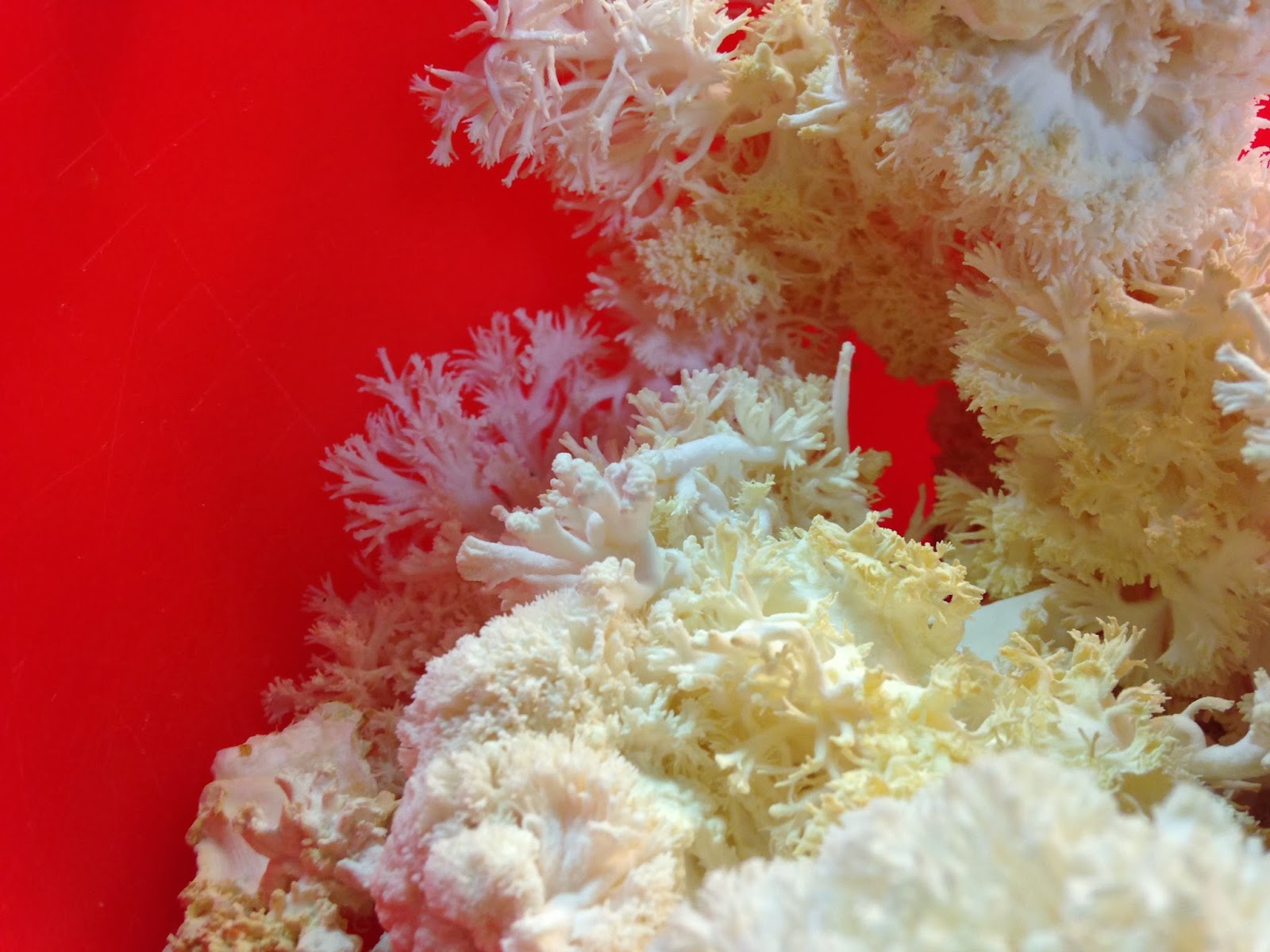 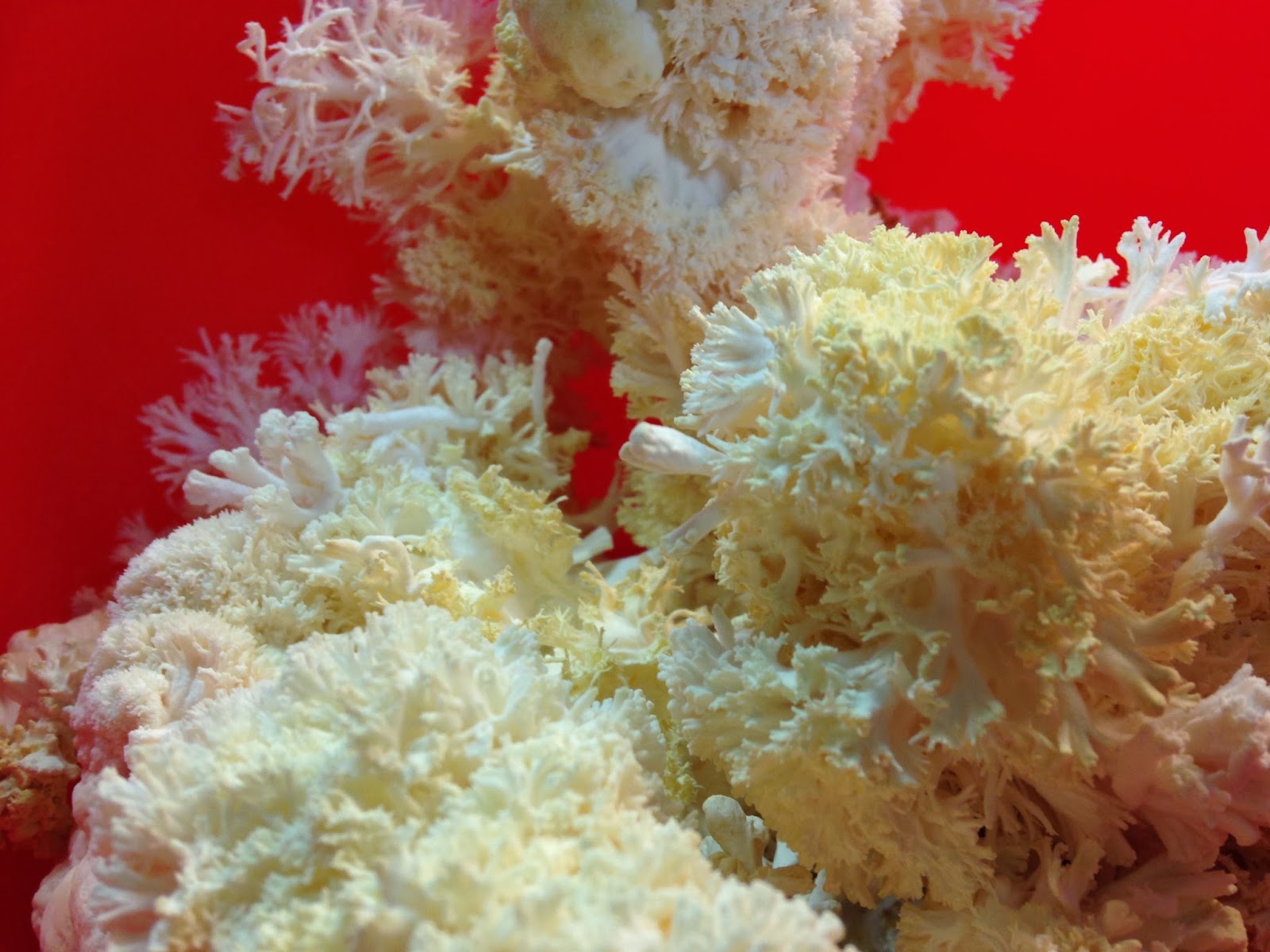 I sauteed them up with some red onions and butter, and a little salt and pepper.  They were pretty tasty, though not my favorite.  I am excited to harvest another flush in a few weeks, and hopefully I can prepare the next batch a little better, and they'll taste more like lobster! 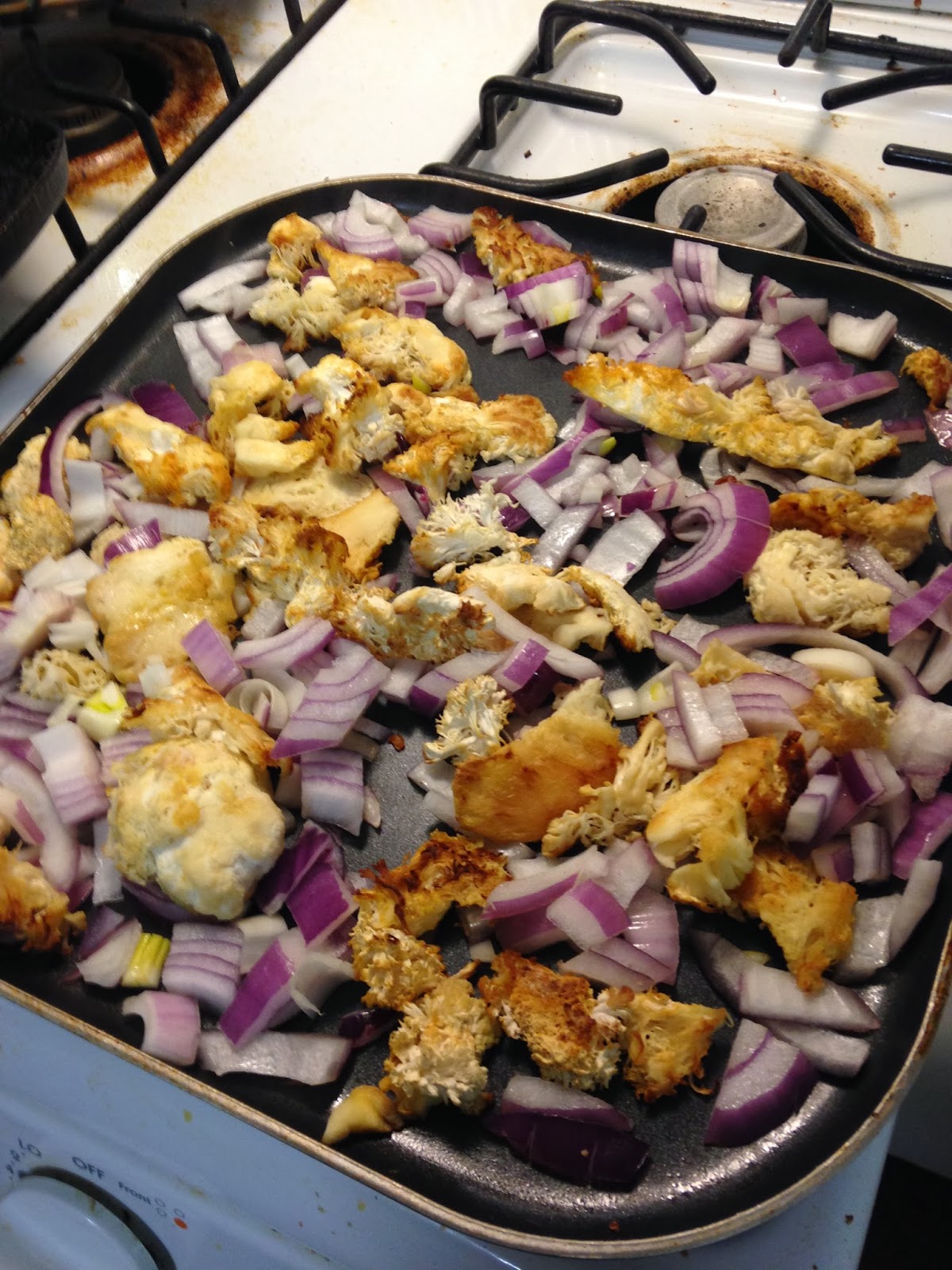 Posted by dirkmcgurk@gmail.com at 10:15 AM No comments:

The Aqua Farm hasn't been doing very well.  The air pump seems to have died.  For a while it was not making very good bubbles, and the water was not reaching the upper tray.  The water wouldn't circulate, and the system was not functioning properly.  I tried cutting the airline tube at different lengths to make better bubbles, and it seemed to work, but eventually the pump stopped making any bubbles at all.  I'm going to ask Back to the Roots if they'll send me a new air pump.  I may also try using an aquarium air pump next to the fish tank to supply the bubbles for the air lift.  Either way, I'm not happy with the system right now.  I'm hoping that I can tinker with it and make it work better.  On the bright side, I regrew some green onions in one of the grow pots, and ate them in a tasty turkey soup (Thanksgiving leftovers!).

Edit 10 Jan 2014 - Back to the Roots is going to send me a replacement air pump.  They recommended placing it outside the system, sitting vertically next to the tank.  They're also sending me new seed packets, and suggested that for the basil and lettuce I may need more light.  Great customer service!


I apologize profusely for the vertical video.  :(

Posted by dirkmcgurk@gmail.com at 9:35 PM No comments:


Also, a few days later on December 3rd, we harvested the arugula.  It ended up being too bitter to eat.  We harvested it too late.  I'm still learning about growing veggies, but it's been a fun experiment! 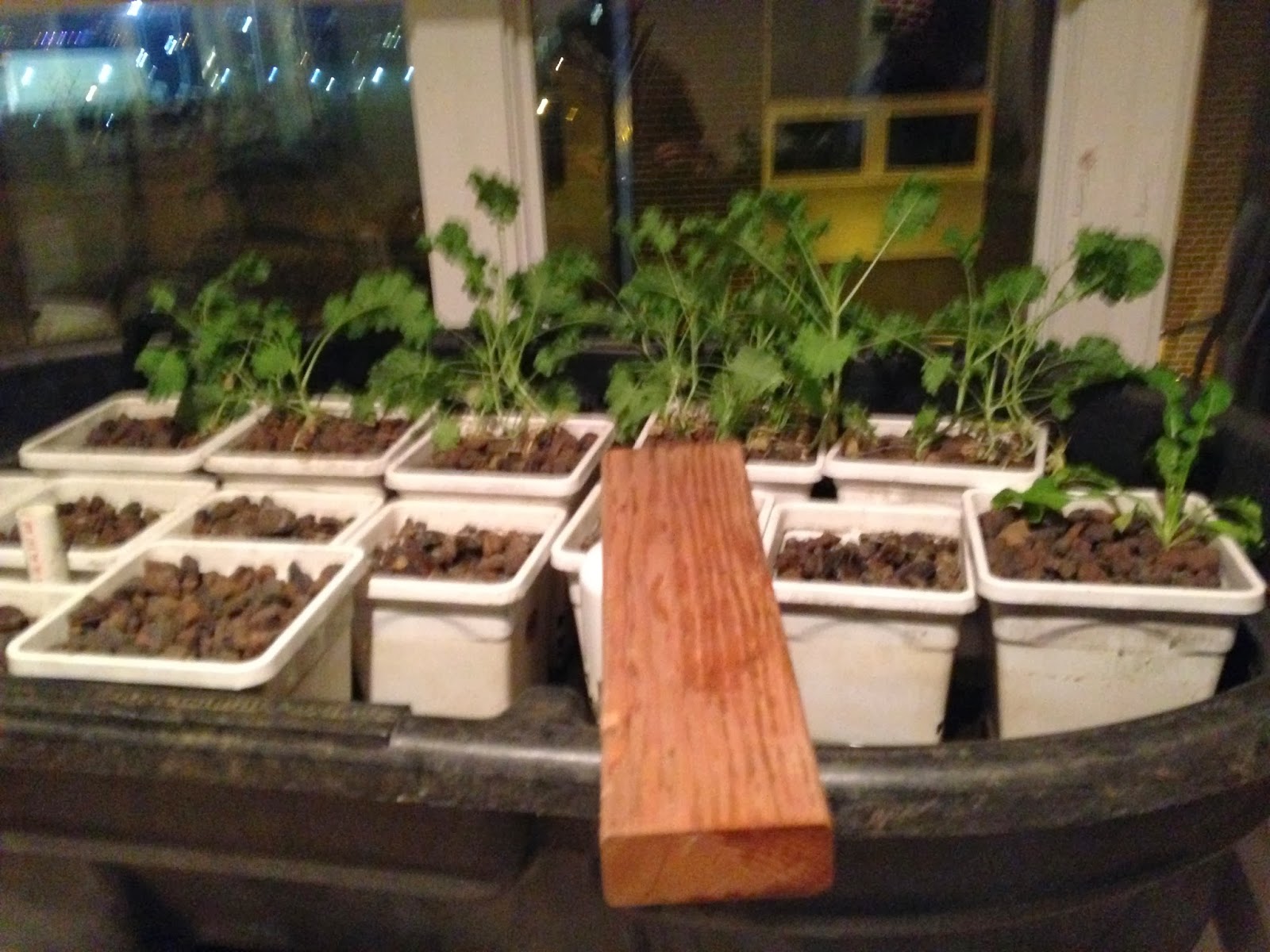 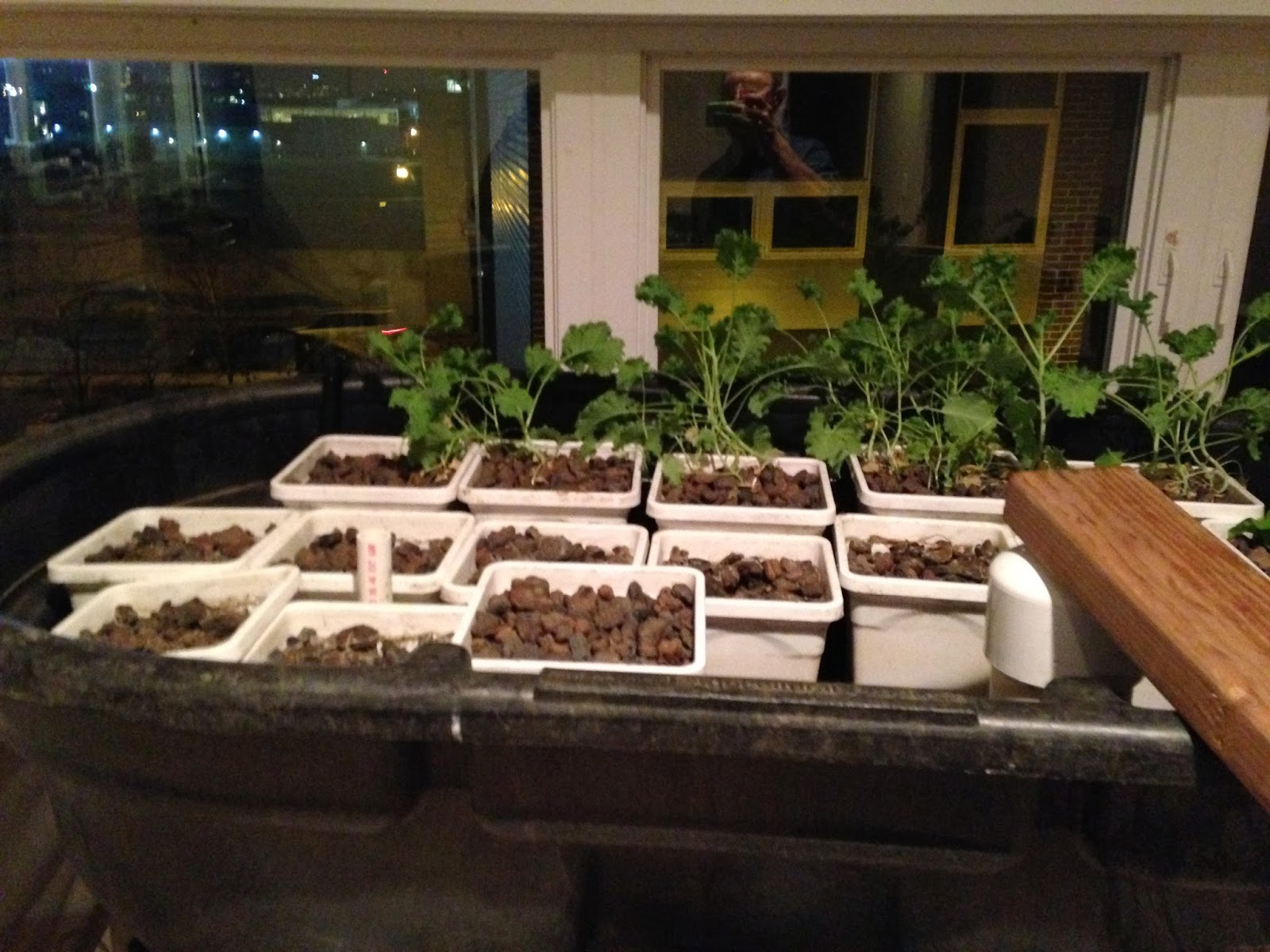 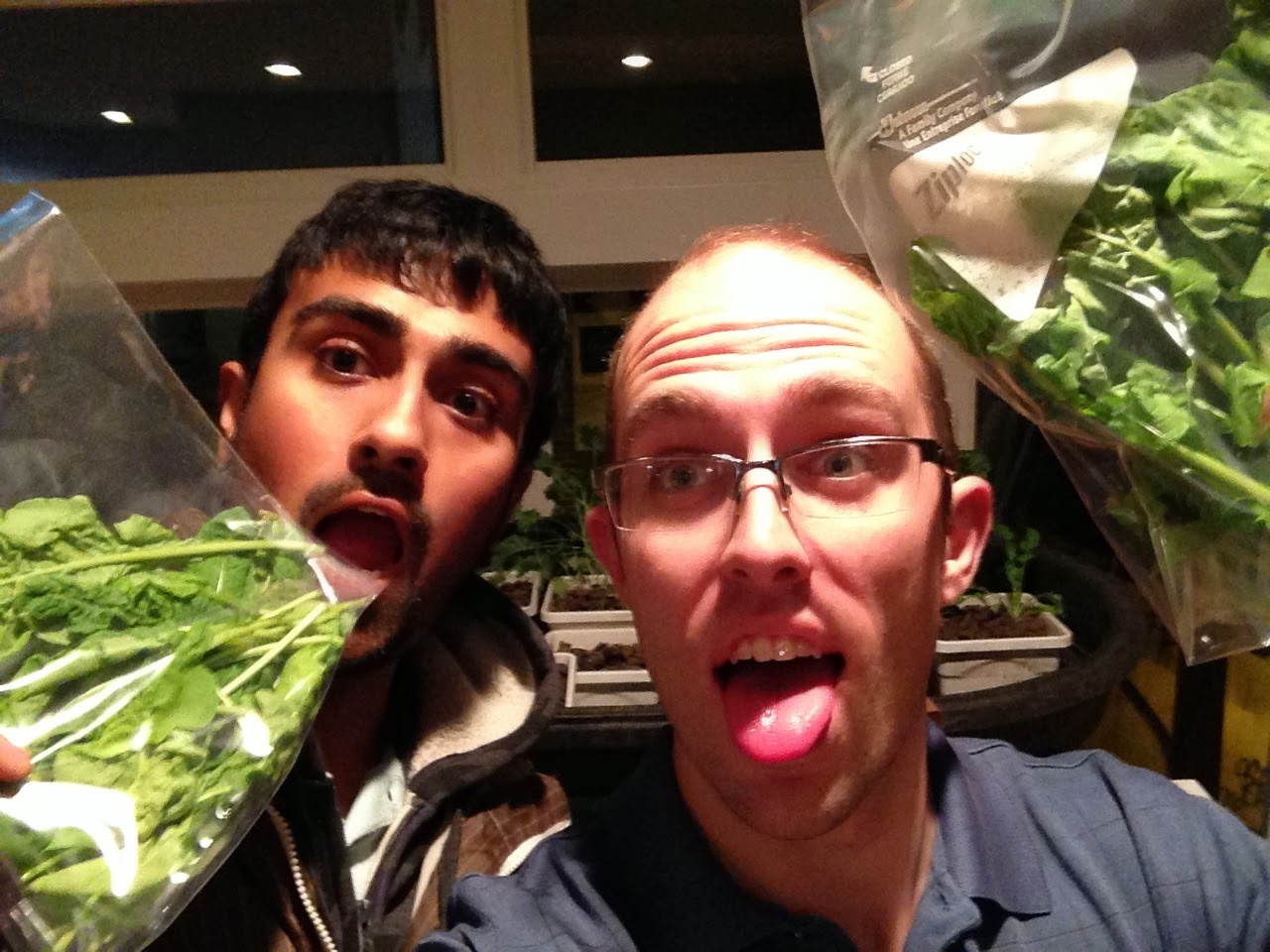 Posted by dirkmcgurk@gmail.com at 9:14 PM No comments: