My buddy Brian gave me some Stropharia spawn a few months back that I have been running out onto fermented woodchips.  The woodchips are finally fully colonized, and I spread them throughout the mulch around my garden.  Hopefully it will outcompete the Alcohol Inky Cap mushrooms in the garden, and I'll have some Garden Giant mushrooms in the Spring!  Here's some photos: 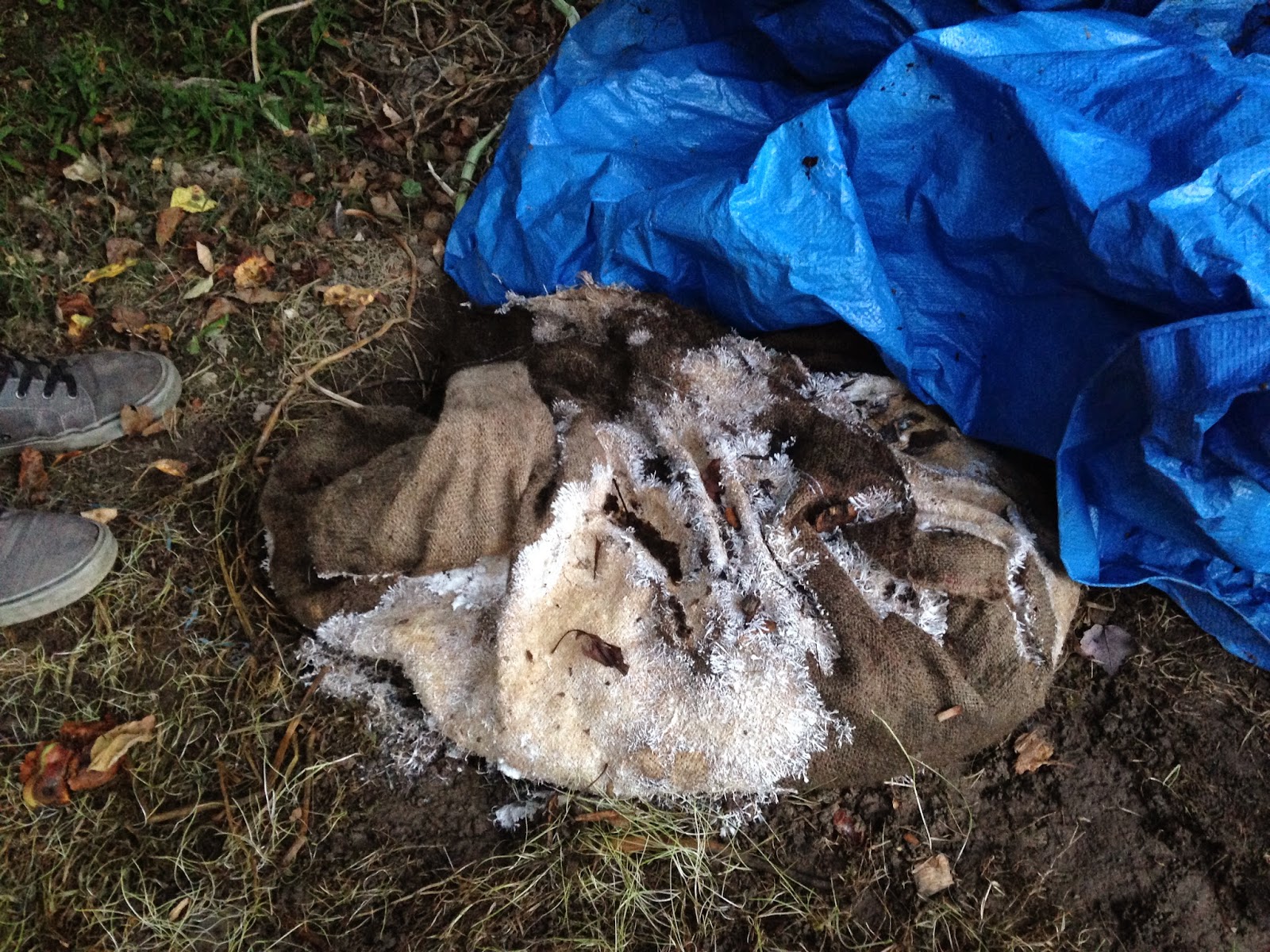 The woodchips colonizing in the burlap sack, buried in a small hole. 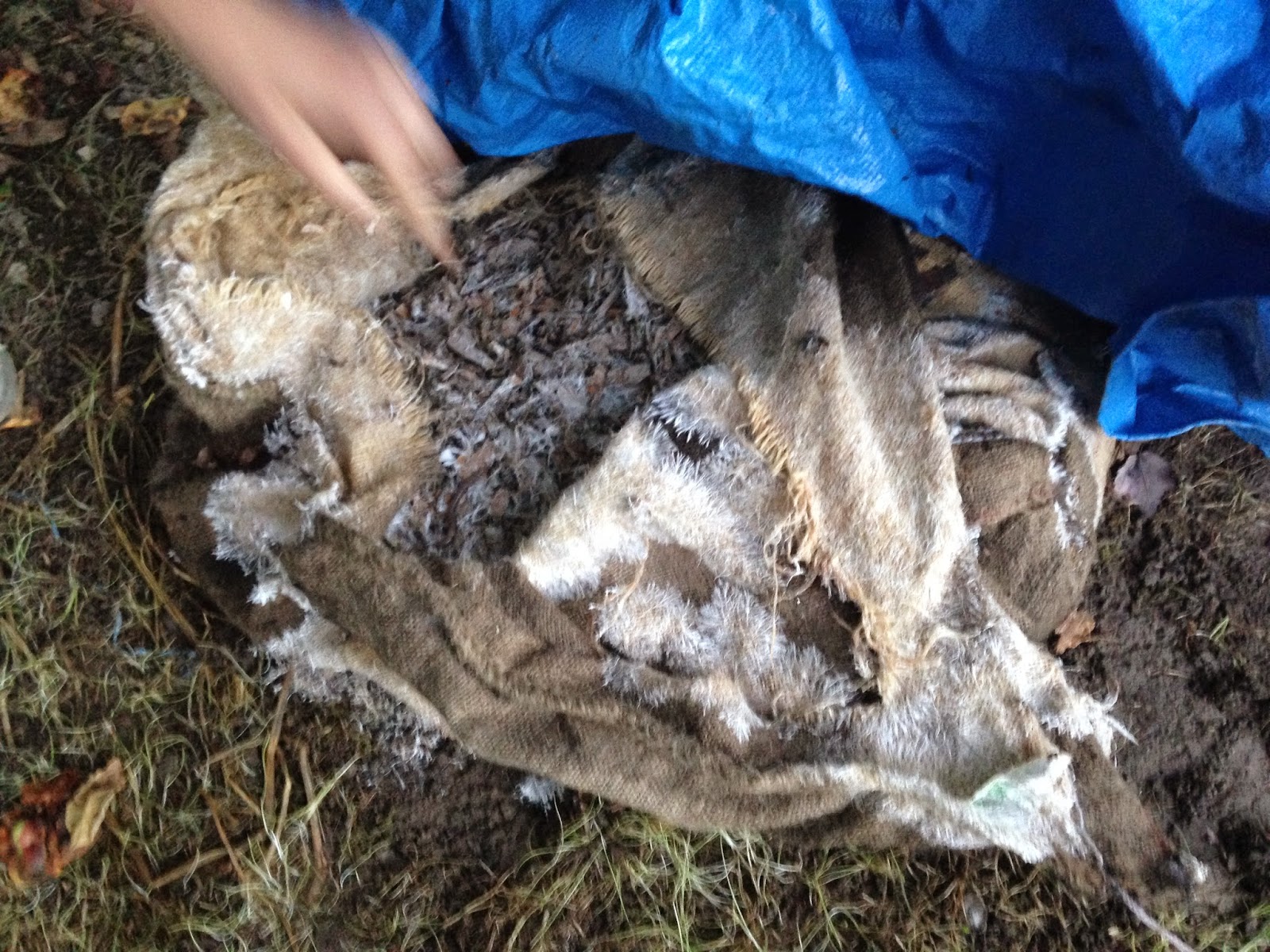 The mycelium is exploding with life! 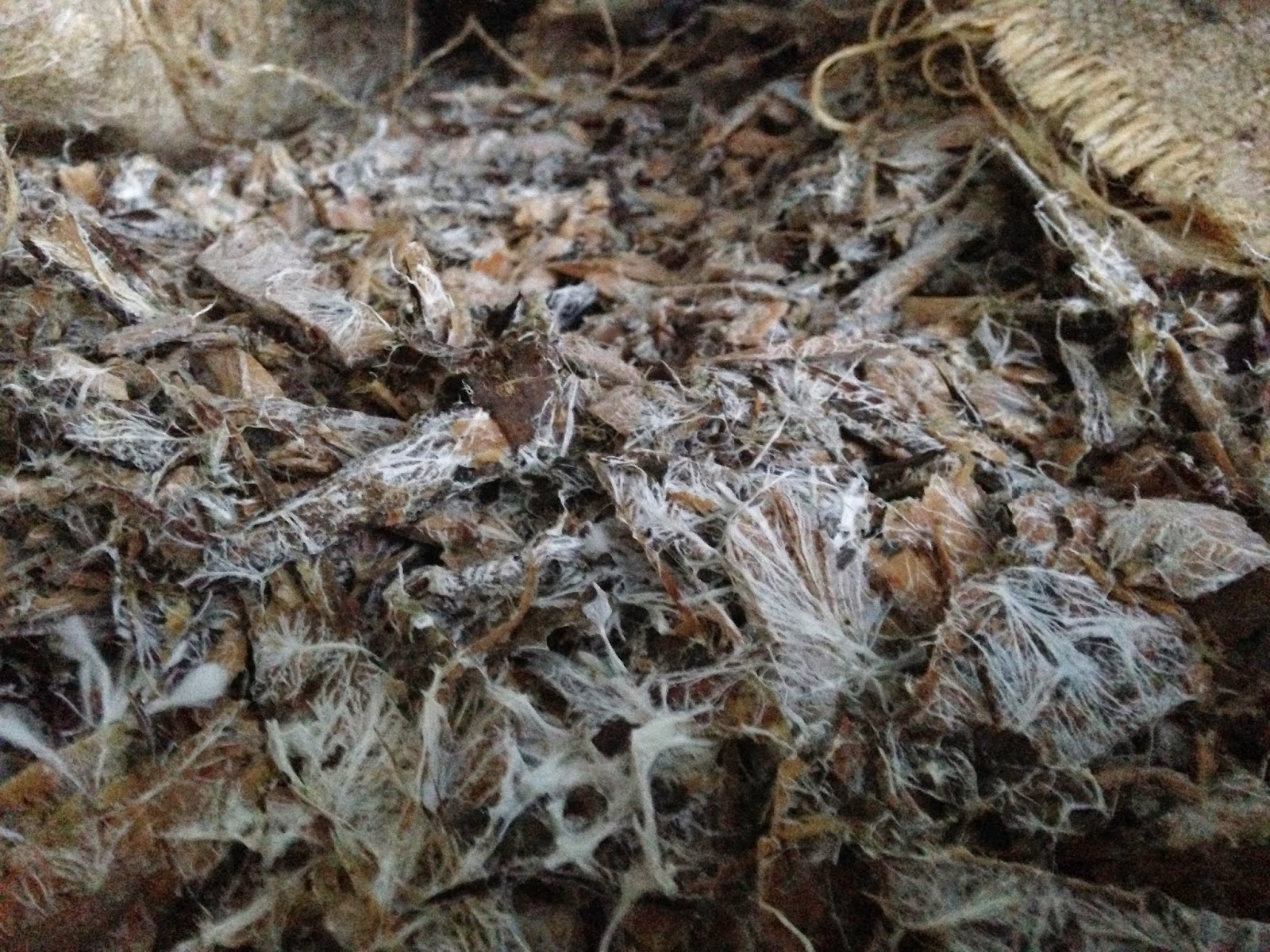 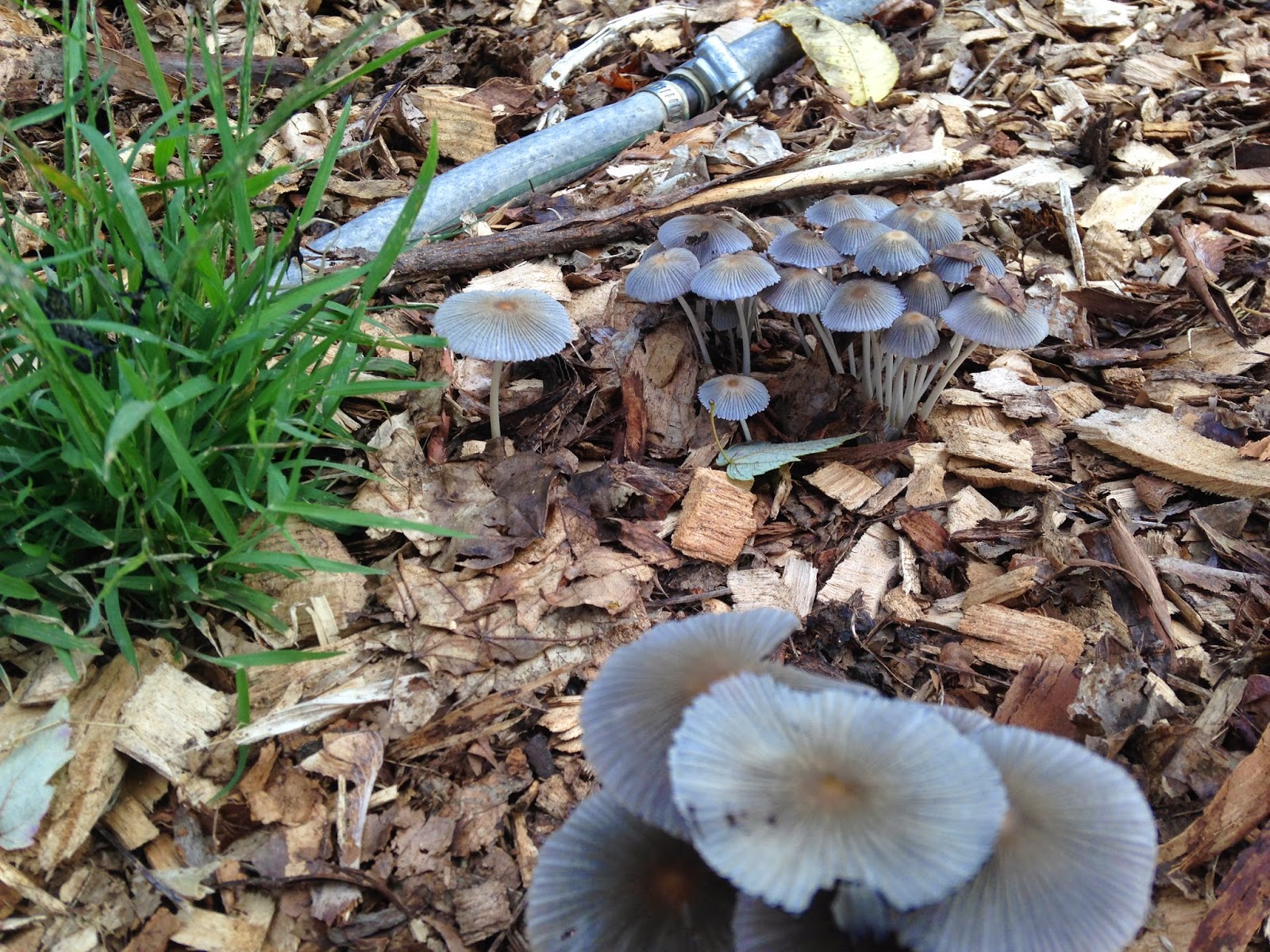 I'm hoping that the Stropharia will out-compete these inky cap mushrooms, which are edible, but toxic when eaten within 3 days of consuming alcohol.  That's no fun...

Posted by dirkmcgurk@gmail.com at 3:38 PM No comments:

I recently expanded the garden to make room for some more crops.  I extended the existing in-ground raised bed, and dug two more.  I planted lettuce and carrots in the 1st extension, chard and onions in the 2nd extension, and kale in the 3rd extension.  I'm seeing a lot of grass pop up in the 2nd extension, rather than chard and onions, but we'll see how it goes.  The lettuce is growing well, and nothing yet in the kale bed.  I pulled back the cucumbers, no more of those for this season.  I'm still harvesting chard, tomatoes, peppers, and sage. 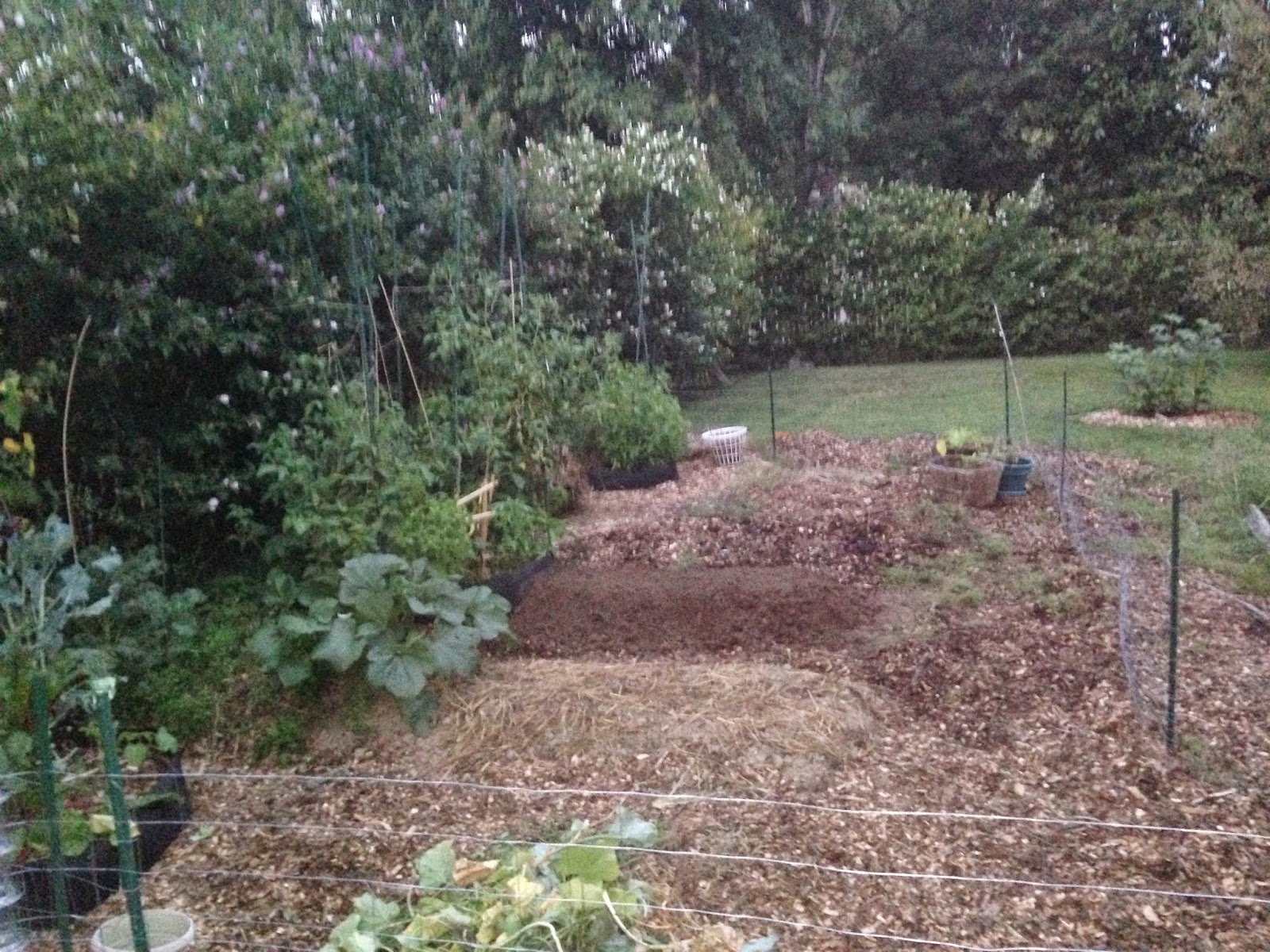 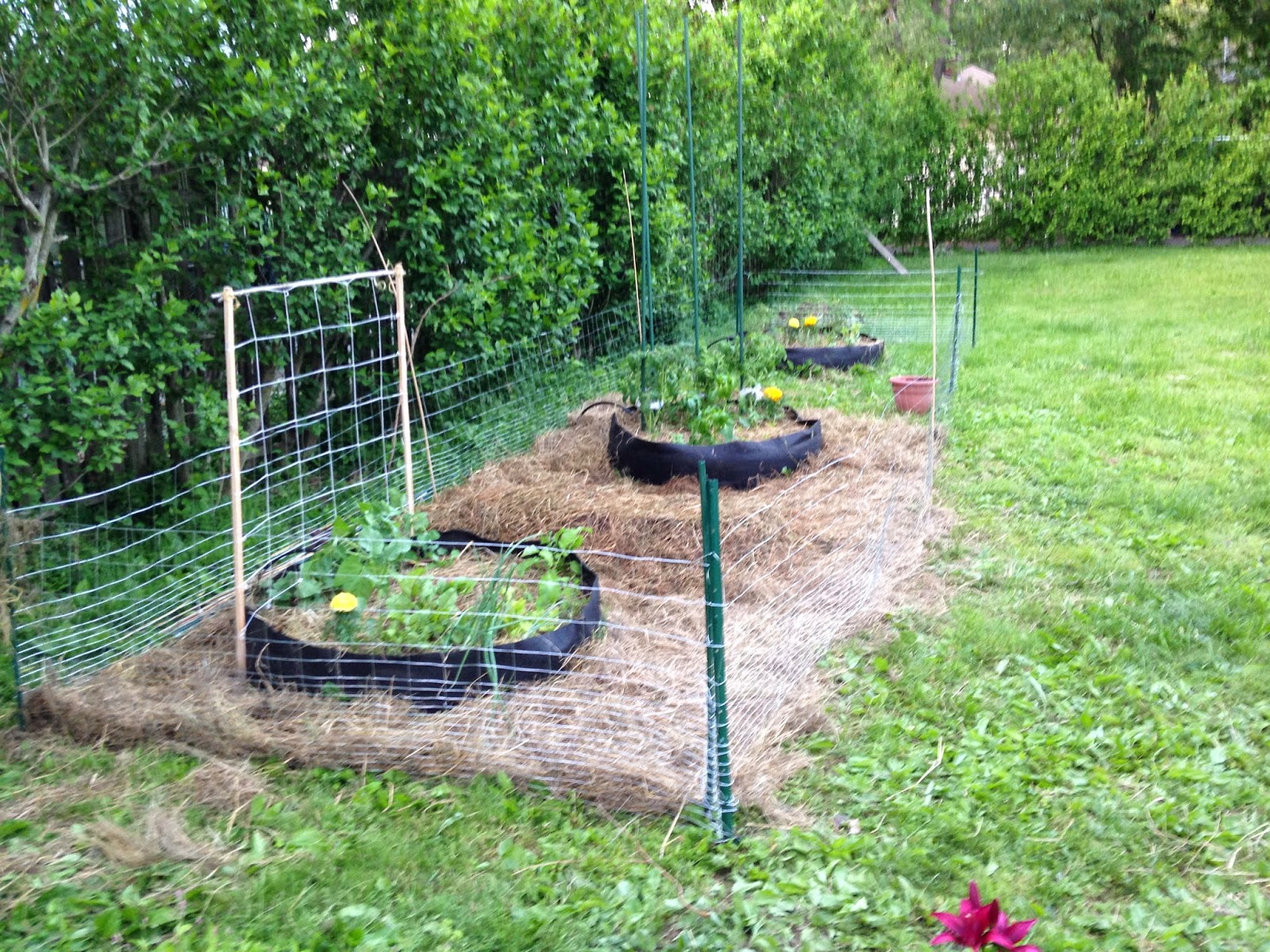 The basil seems to have some sort of nutrient deficiency.  I thought it might be calcium or potassium, so I made a solution of crushed egg shells and water, shook it up well, added some wood ash for potassium, and poured that around the basil roots.  It hasn't helped yet after two days.  I think the other basil plant looks like it needs nitrogen, so I'm going to get some of that in there (biochar charged with pee, or just pee). 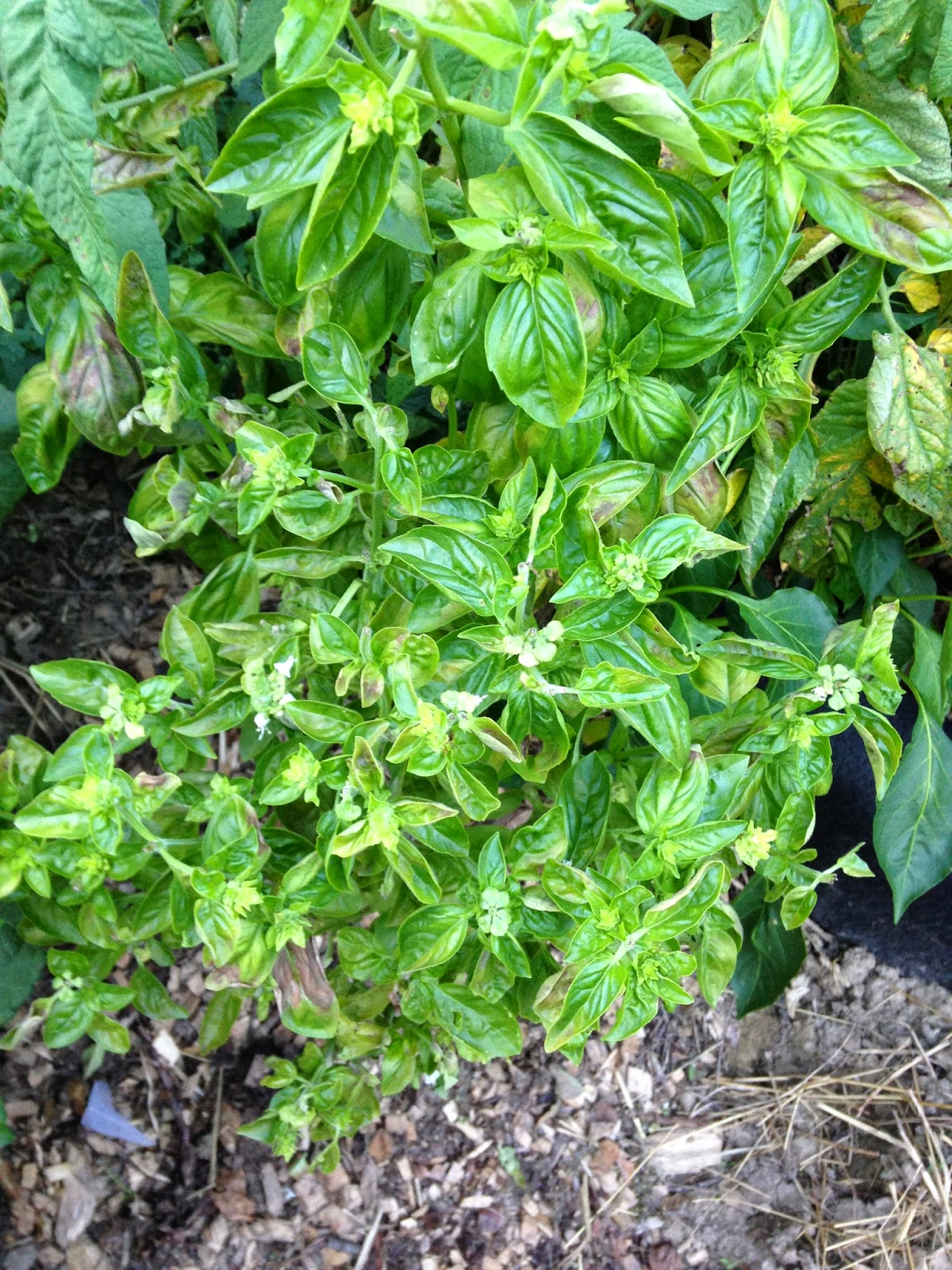 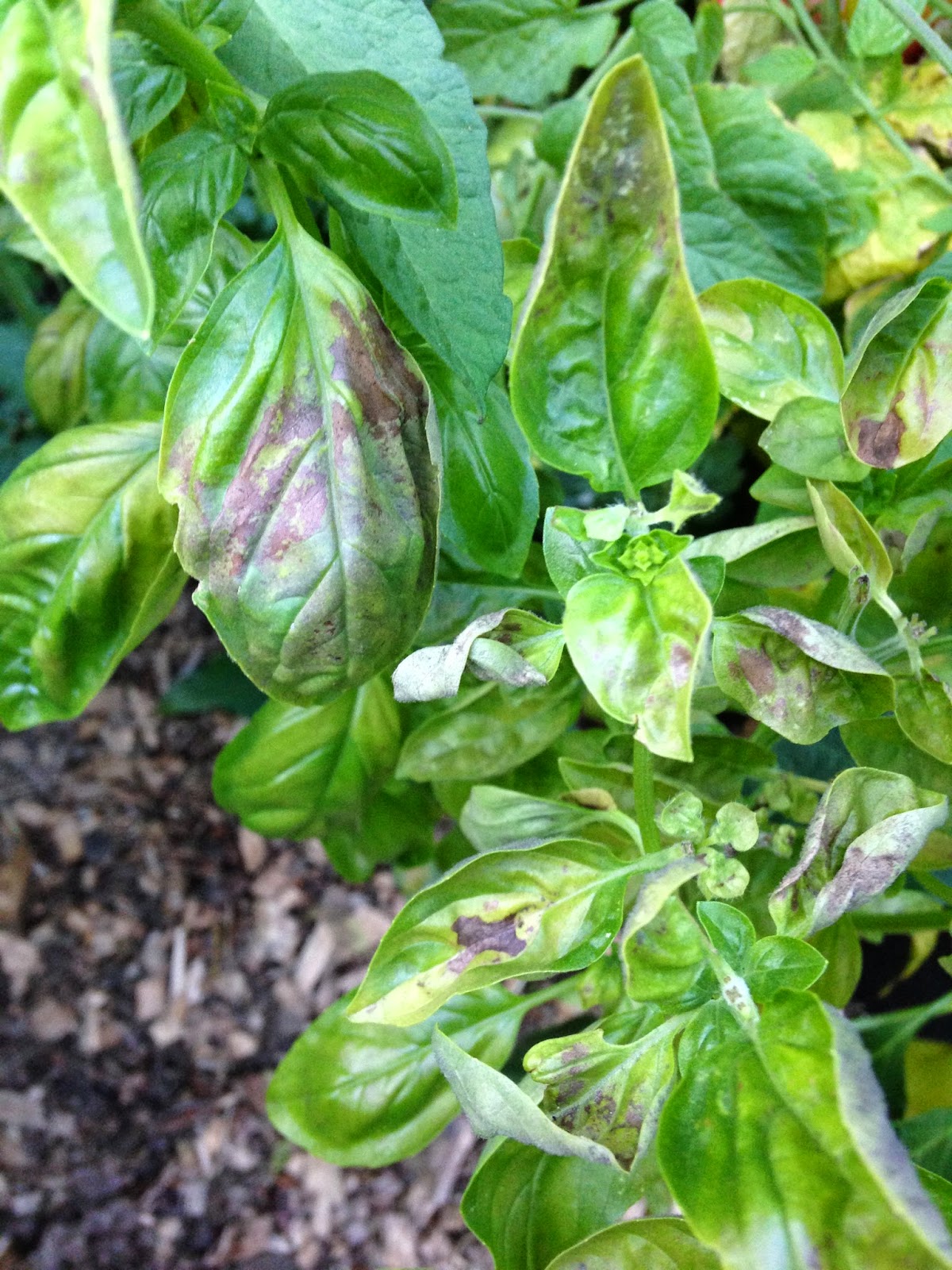 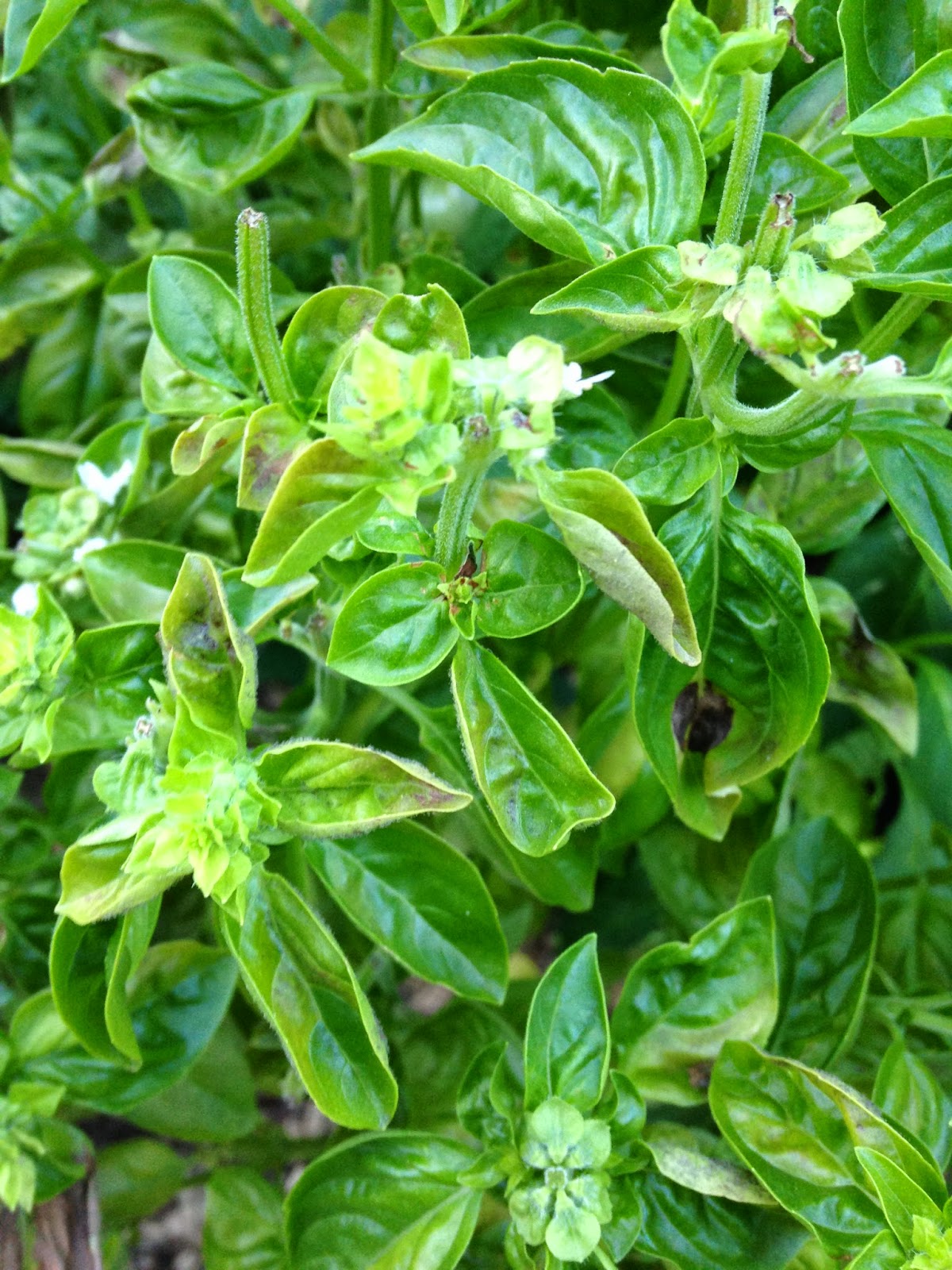 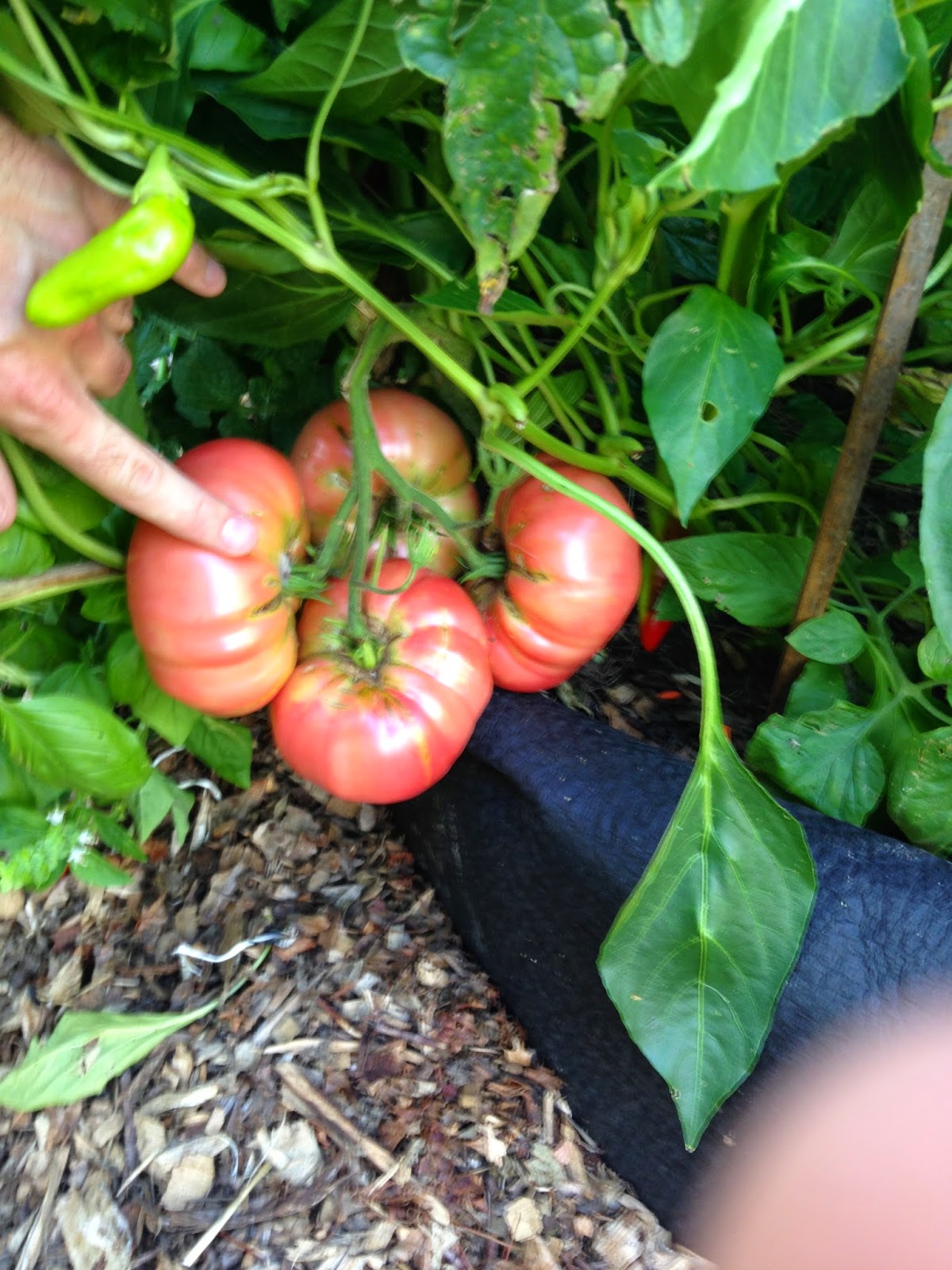 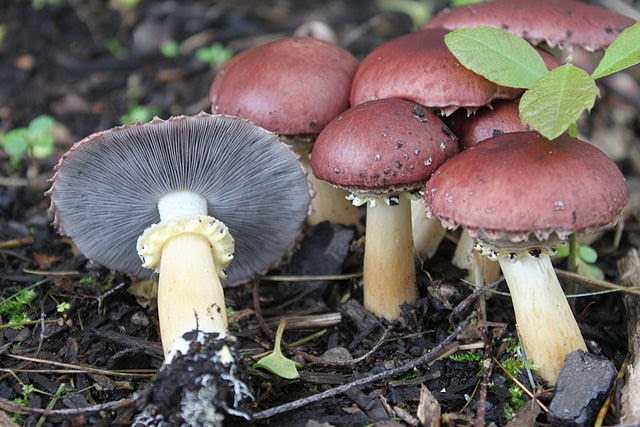 Hopefully I'll be seeing these in my garden soon!

I've been interested in mycology for years, experimenting with oyster mushrooms, lion's mane, and listening to lectues by Paul Stamets in my free time.  I even got to see Paul talk at Burning Man in 2013.  I saw him talk again in Philadelphia in 2014, and one of the things he talked about was his "mycototes."  It's a system where he ferments wood chips, submerged in water, for about a month.  Then he drains the water, and the result is a fungus substrate that can be rapidly colonized by mycellium, especially Stropharia, (garden giant, or winecap mushroom).  I know some guys starting a gourmet mushroom cultivation business in Philadelphia, who traded me some stropharia spawn on sawdust for some bricks of coco coir that I had.  I soaked some woodchips in a trashcan for about a month.  The trashcan had a leak, so I had to refill it frequently, and occasionally the water level dropped and left the wood chips unsubmerged.  However, the experiment seems to have worked.  The fermenting woodchips were colonized with anaerobic bacteria, which died off when exposed to air after draining the wood chips.  I filled a burlap sack with the wood chips, mixed in the stropharia spawn, dug a hole behind the shed, and dropped the sack into the hole, and covered it lightly with a tarp.  I've been watering occasionally, and the burlap sack is now filled with mycellium.  I'll save some of this for future spawn, and I'm going to mix the rest in around the woodchips in my garden.  Hopefully we'll have lots of garden giant mushrooms popping up and going into our dinner! 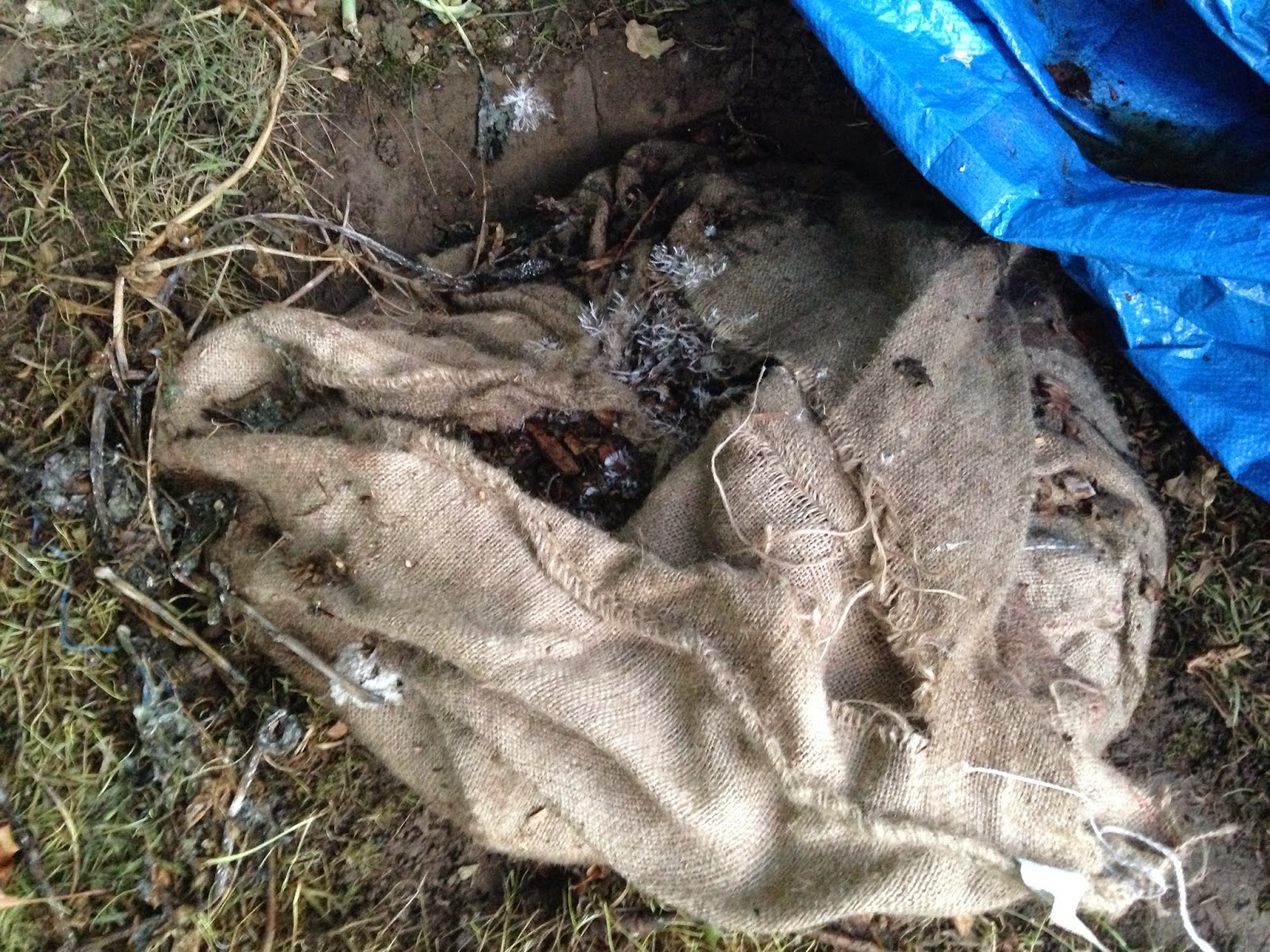 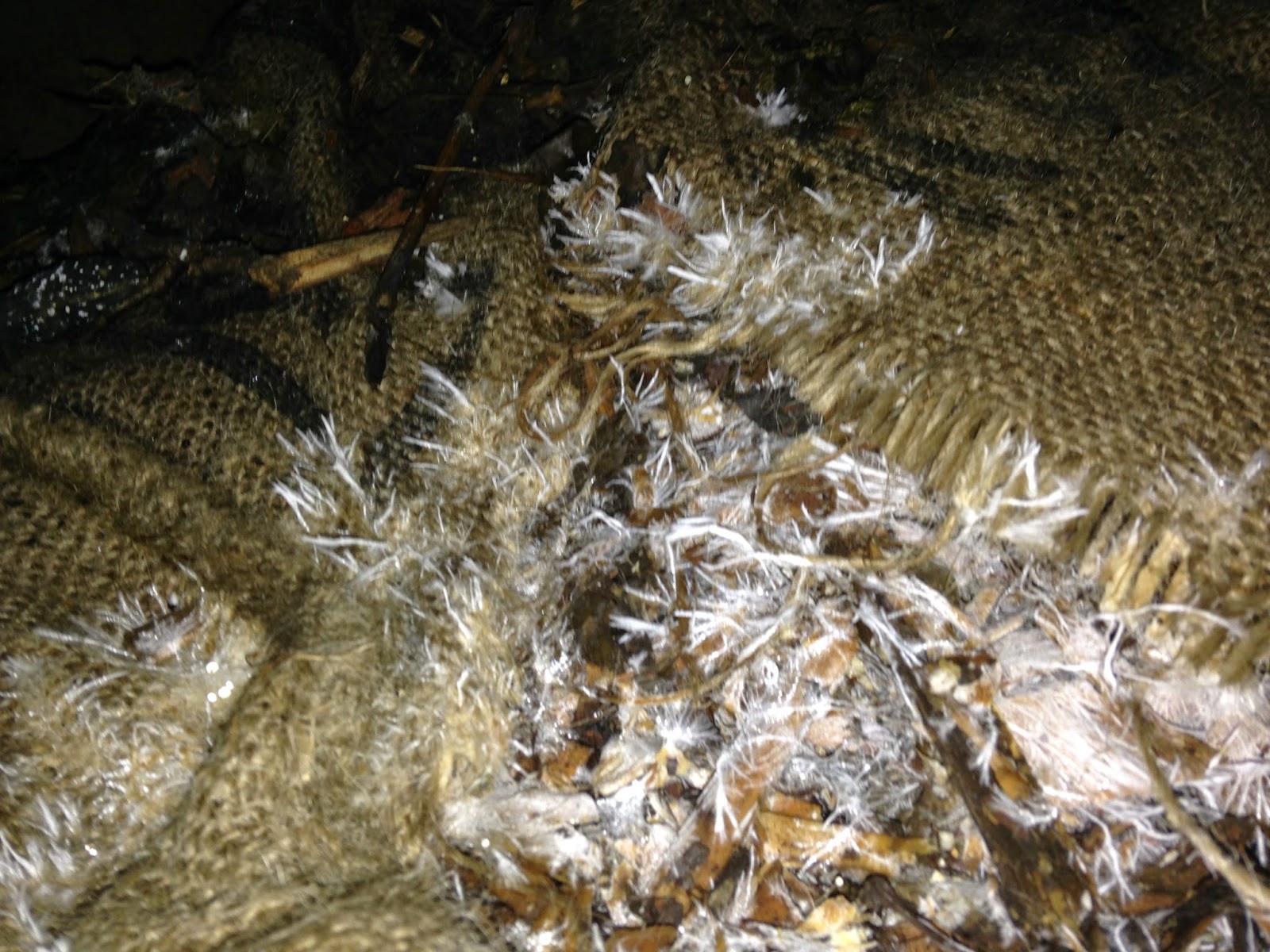 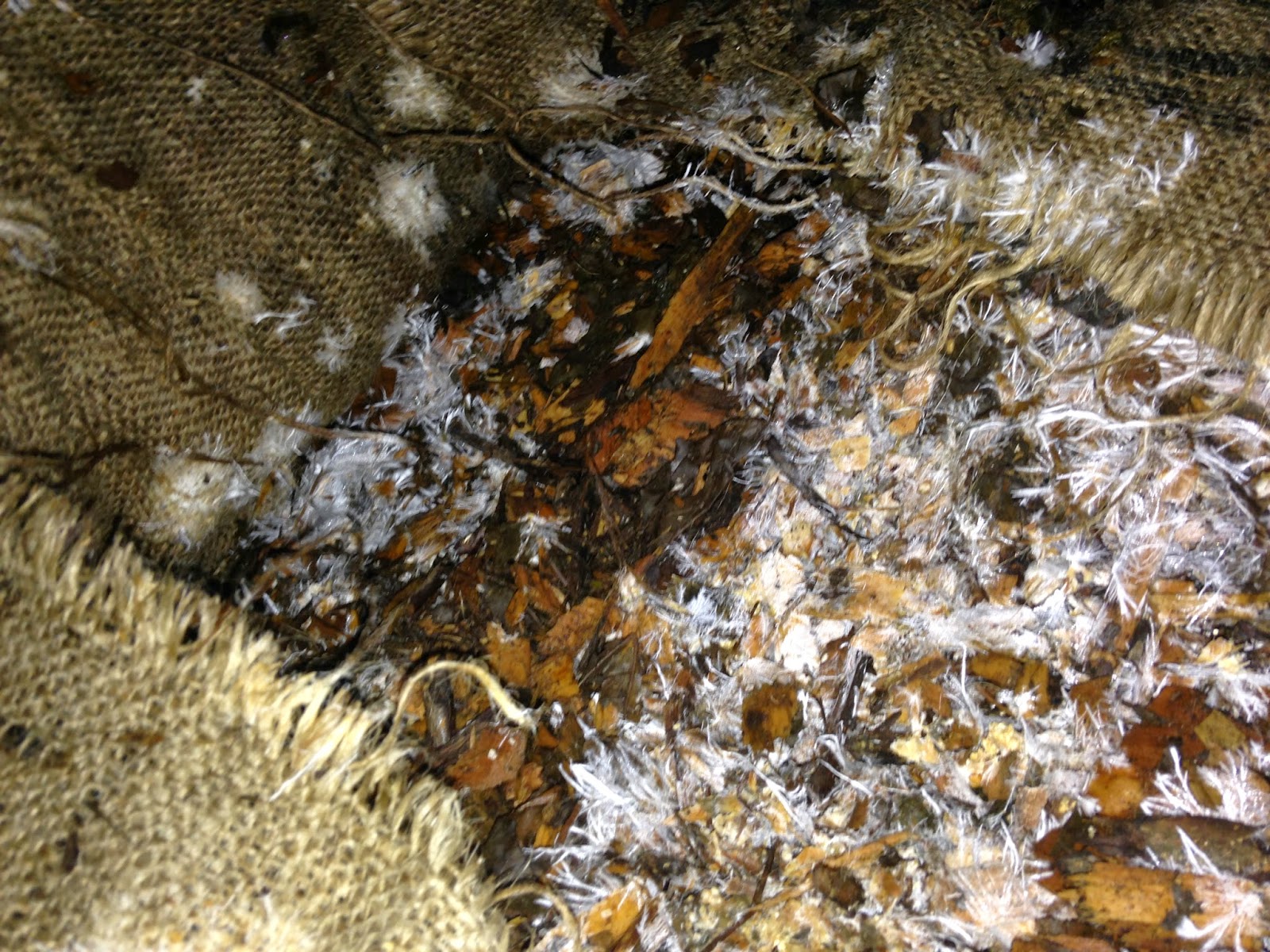 Beautiful!  Look at all that white stringy fungi mycellium. 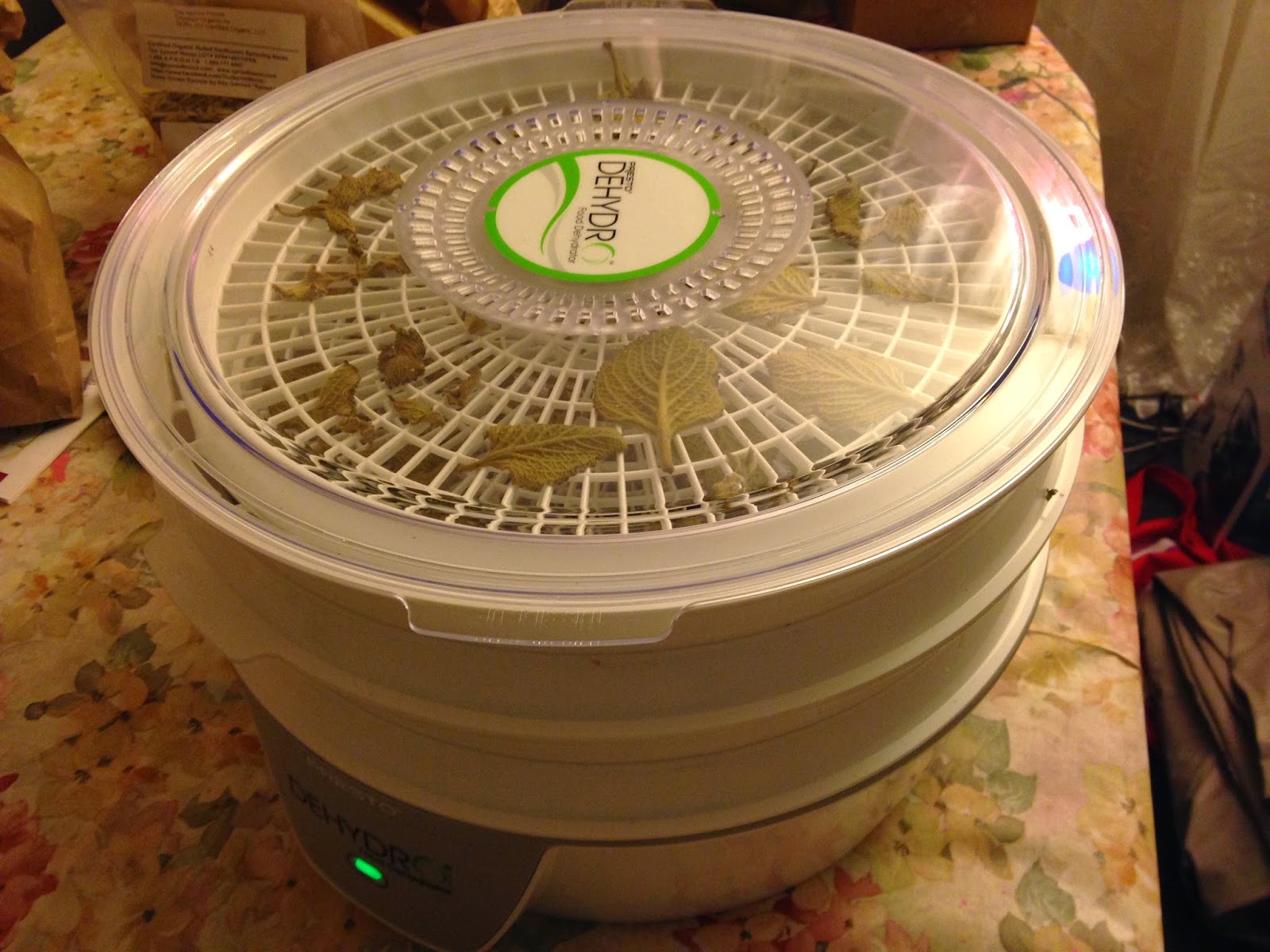 My Girlfriend got me a dehydrator for my birthday, so I've been drying herbs from my garden and my parent's herb spiral.  Right now I've got some thick leaf oregano drying.  Fresh herbs in homegrown tomato-basil sauce for the win!

I saw a neighbor of mine was getting rid of some old windows, so I grabbed one and am planning on using it to make a solar dehydrator like these here:

My girlfriend also got me a sprouting kit for my birthday.  Sprouts are tasty on sandwiches, and can be grown year-round indoors without light.  Super cool! 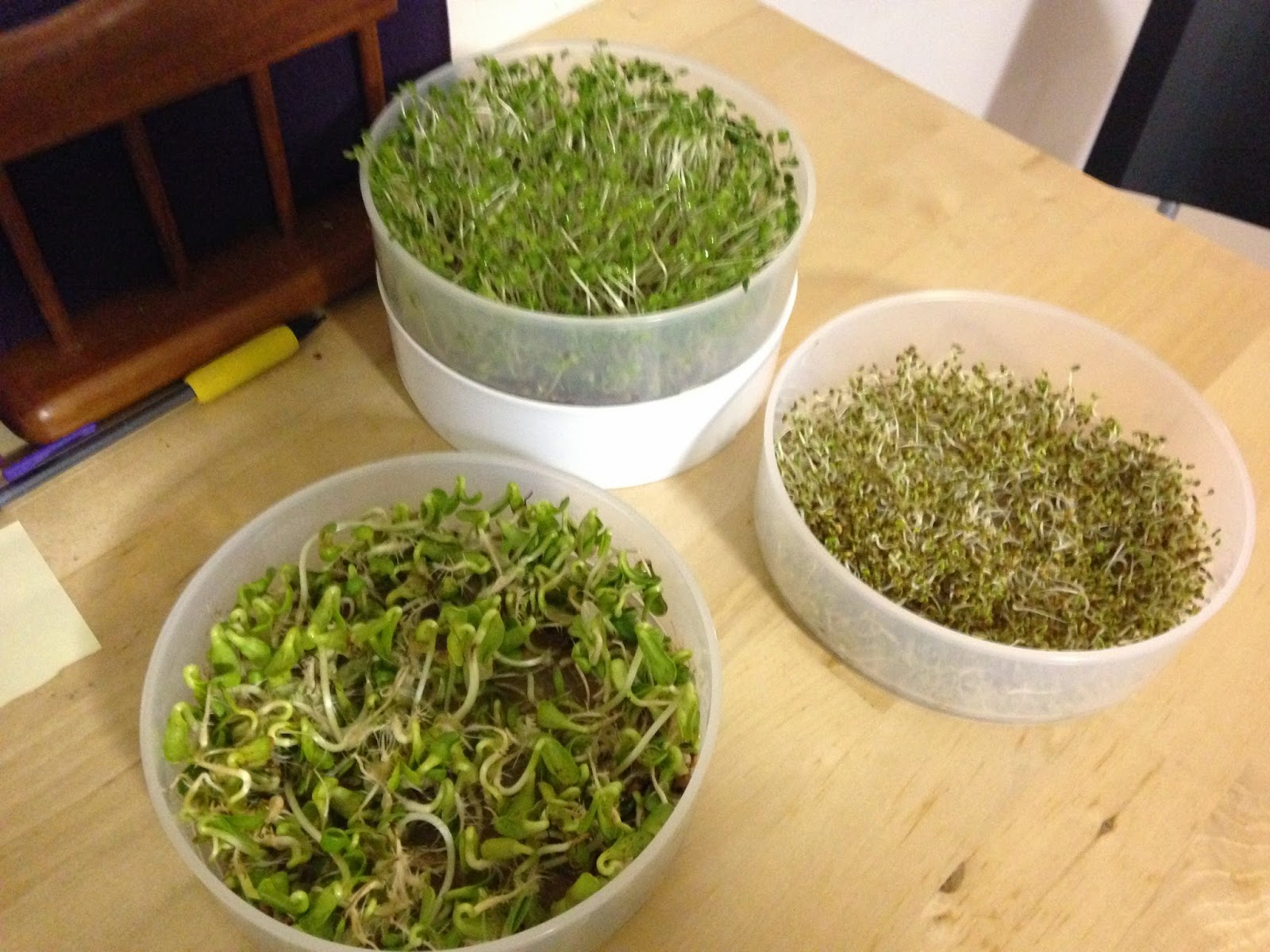 Posted by dirkmcgurk@gmail.com at 6:00 AM No comments:

The IBC Aquaponic system in Delaware is still cycling.  It's had some pH swings, too high, then too low.  When it was high, I added some HCl to lower it a bit.  When it was low, I drained about 1/4 tank and added hose water which is high pH.  Green algae still a problem.  I cleaned algae from grow bed by waiting until the Bell siphon kicked on, shutting off the pump, and waiting until the water all drained from the grow bed.  Then I just wiped out the algae.  No sign of the two Koi fish added before cycling.  :(  I'm sure they're dead.  Well, now that I've killed some fish, I guess I'm a real aquapon.  :-/

When I last checked on the system on September 1st, the nutrients looked like this: 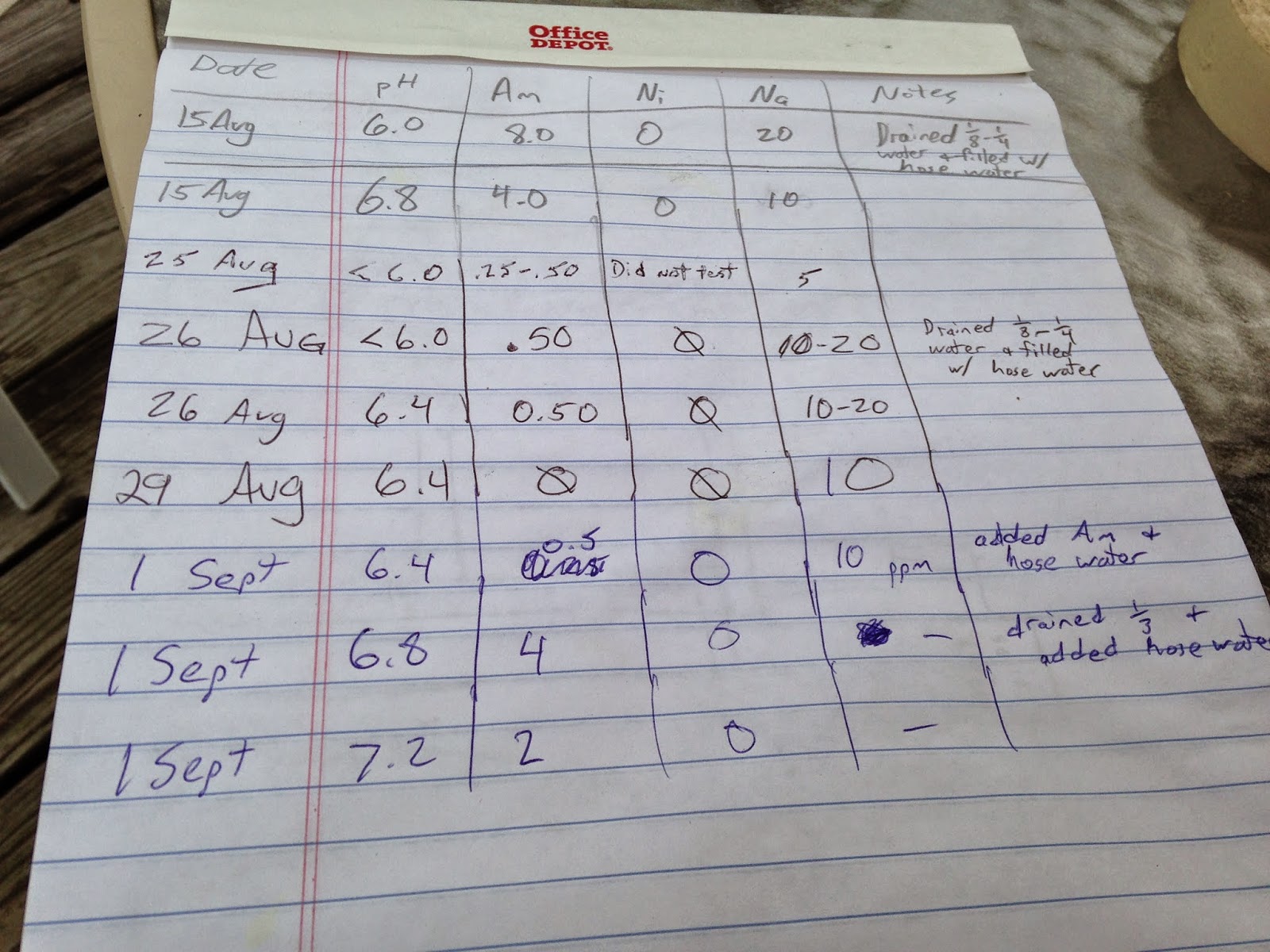 Seedlings are growing, and I'm planning on adding them when they get a little bigger. 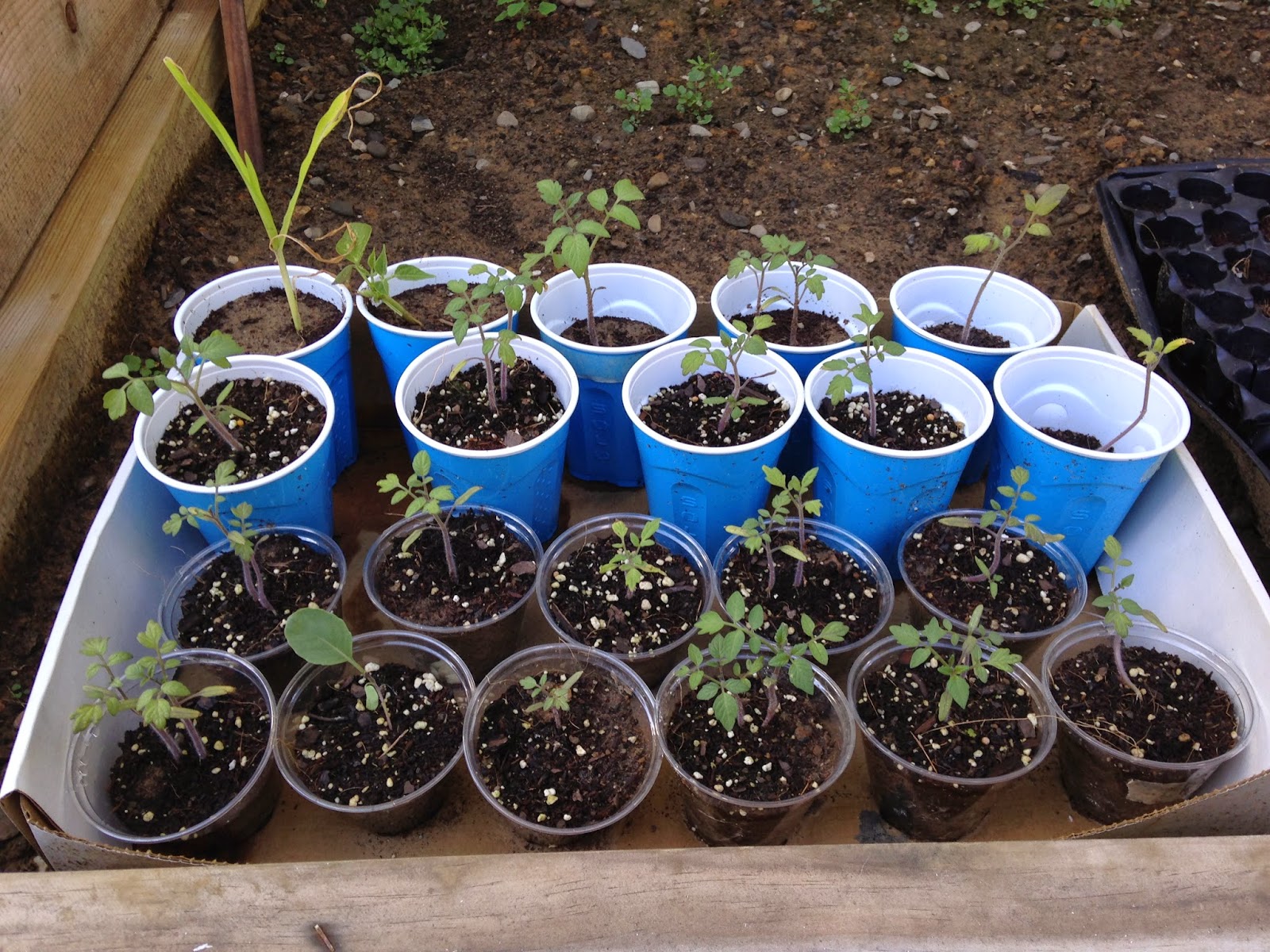 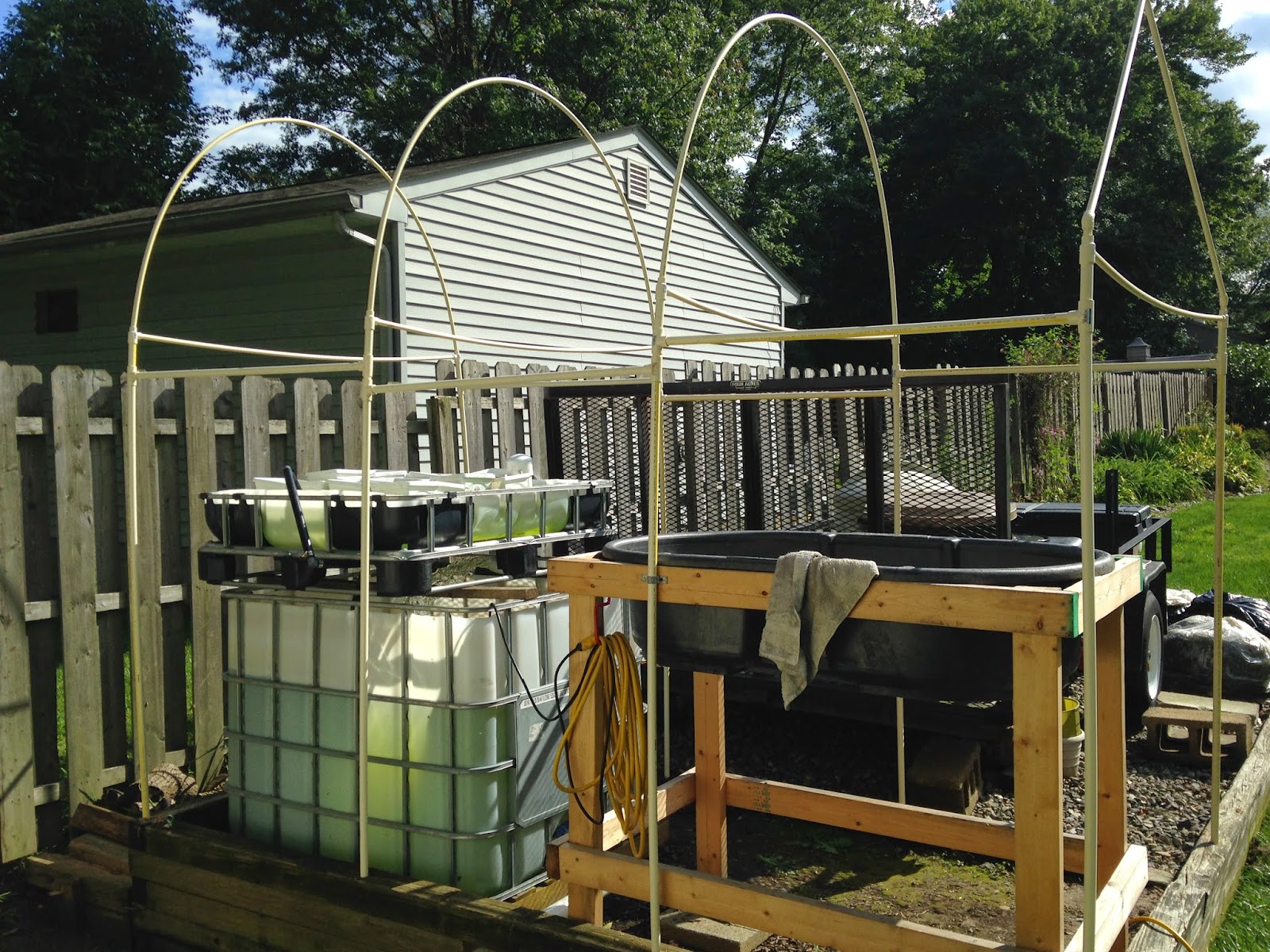 My dad has started constructing a PVC frame for a small greenhouse.  We're going to try to use insulation, water heaters, and maybe a small space heater to keep the system running through the winter.  We'll see how it works out! 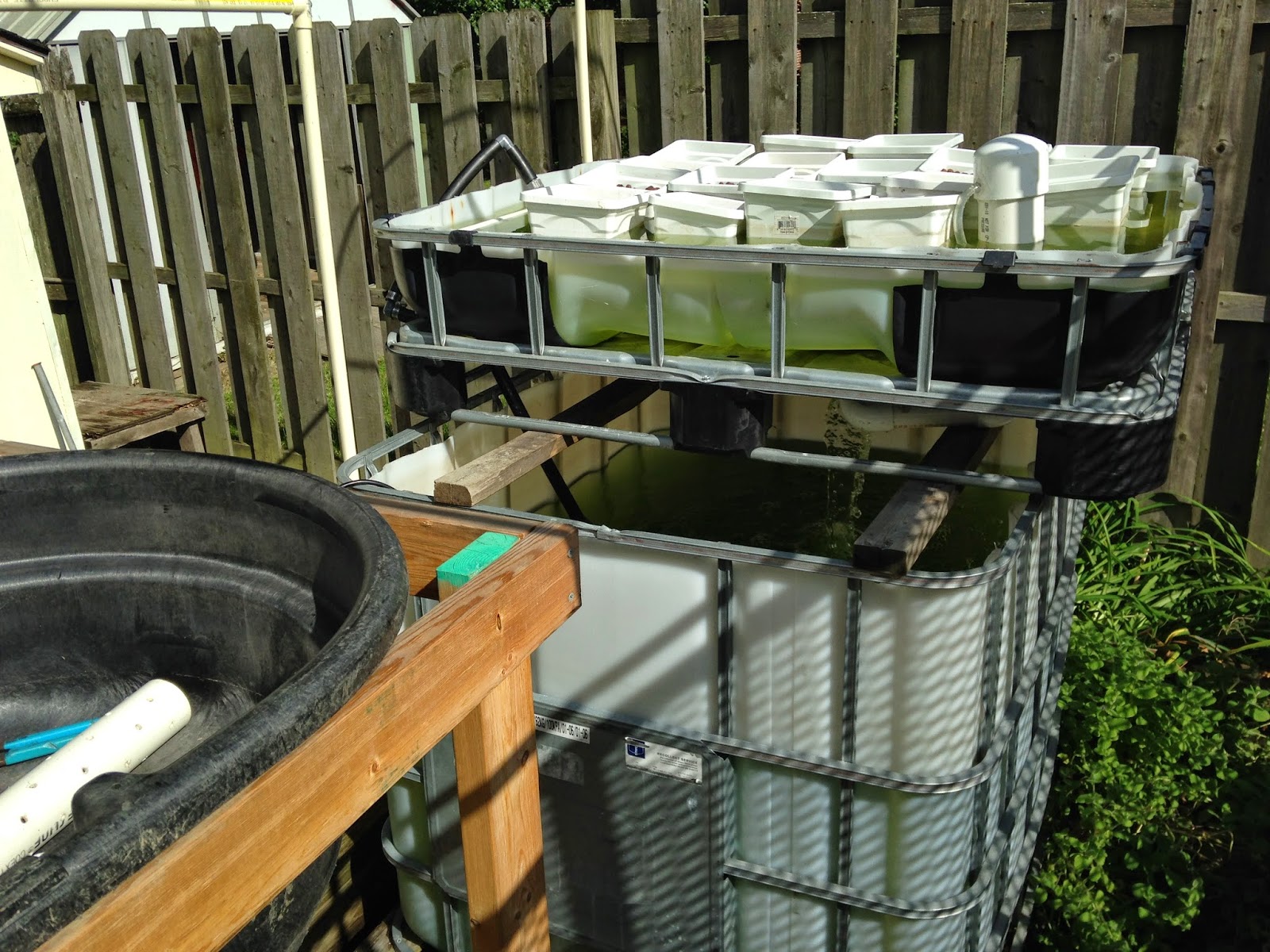 The bell siphon had stopped working for a few days.  It seemed like the grow bed wasn't filling up quick enough to kick on the siphon.  We took apart the pump and cleaned the filter, and it pumped water much faster, fixing the siphon issue. 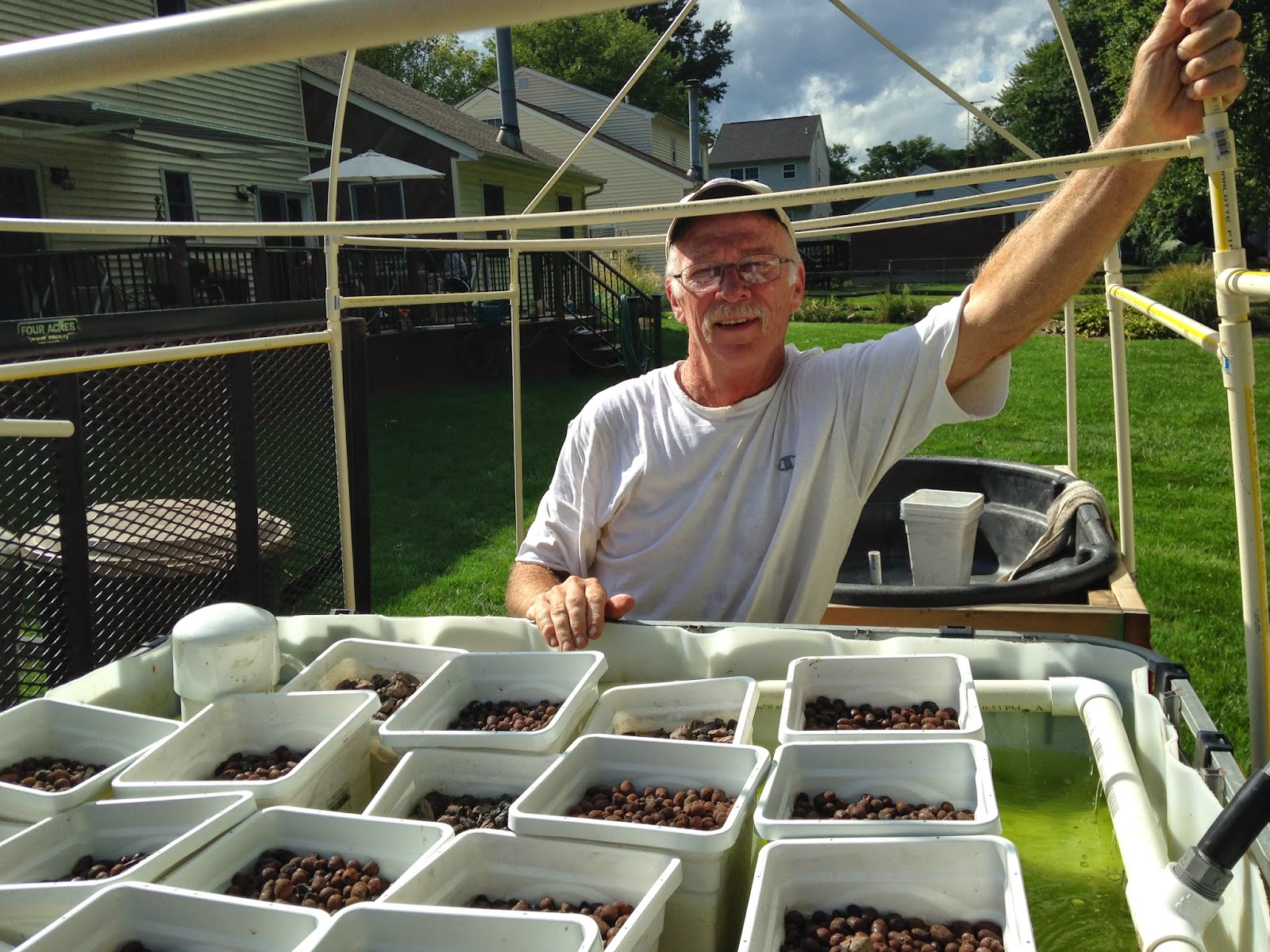 Below are a couple sketches of my plans for the system.  I was originally thinking of adding a solids filter that would sit above both grow beds, but now I'm thinking that if I add a sump tank to grow duckweed, I can add a radial flow solids filter, and a solids lifting overflow to the sytem, which might help keep the system clean, especially the pump. 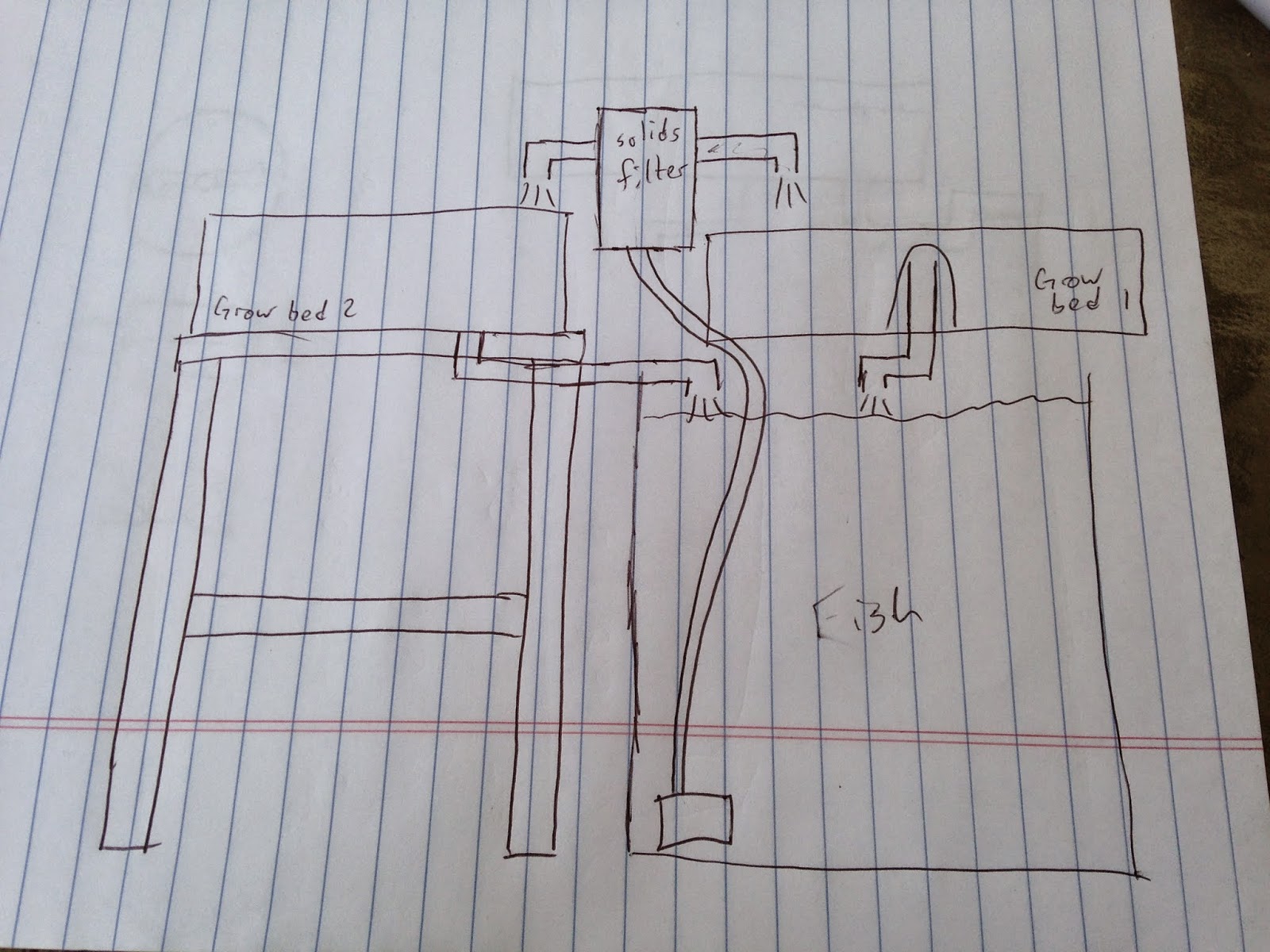 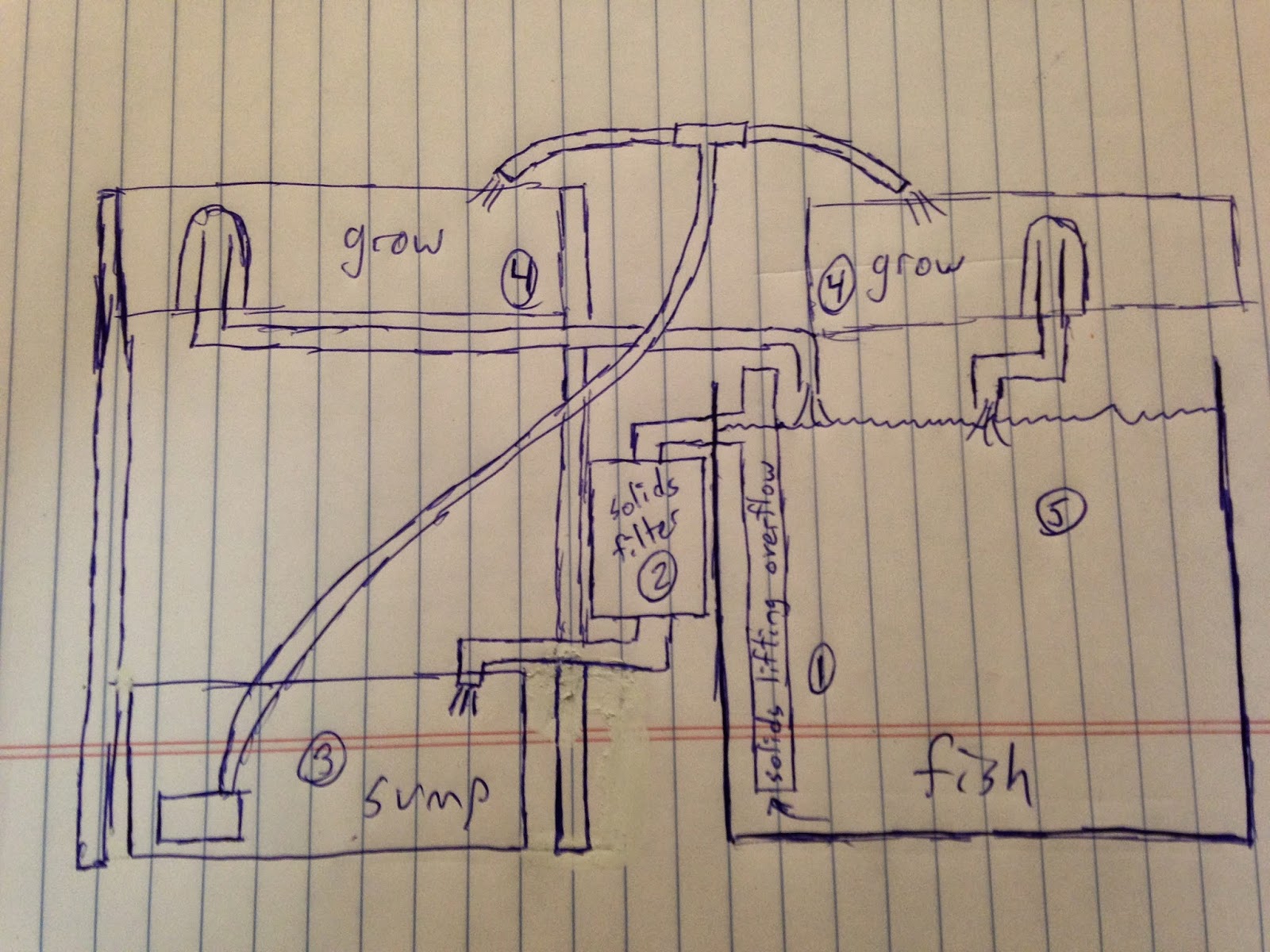 We're deciding between a 90 degree roof, or a rounded roof.  I think the 90 degree roof will help keep snow off the top of the greenhouse, which is my major concern. 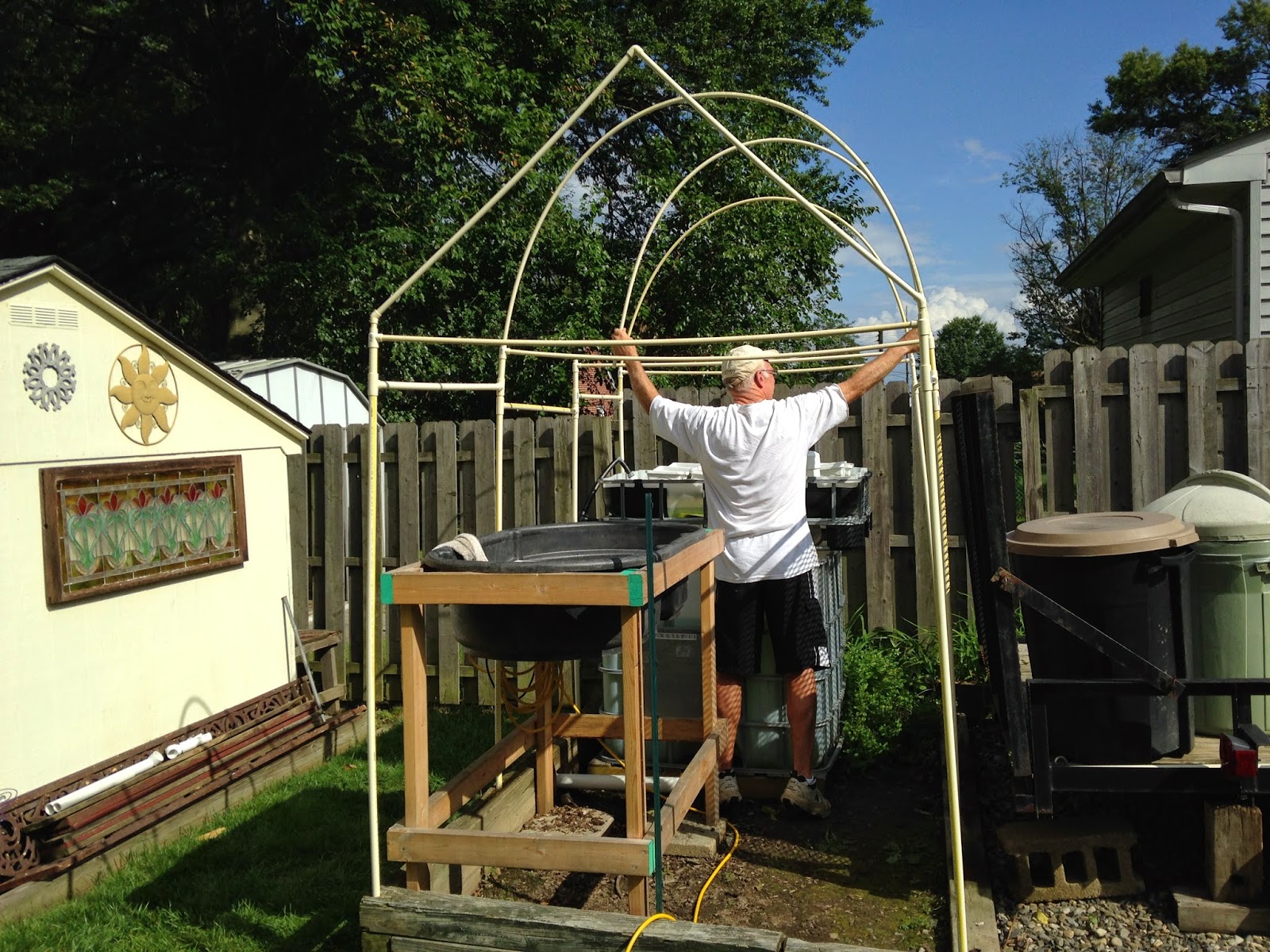 We just have to get the greenhouse up before it gets cold.  My dad's having almost as much fun with this project as I am!

Posted by dirkmcgurk@gmail.com at 10:35 PM No comments:

For the past few months I've been brewing my own Kombucha Tea.  Kombucha is a fermented, sugary tea which many believe to have health benefits.  The sugar is digested by a SCOBY (Symbiotic Culture Of Bacteria and Yeast), that weird spongey thing floating in the jars below.  The scoby is actually edible, but I've never taken a bite!  I've read that the pro-biotics in kombucha are good for digestion and gut health, and when I drink it, I feel a tingly, enjoyable sensation that is hard to describe.  It feels good to drink!  However, I have some reservations.  In an article that Paul Stamets wrote called The Manchurian Mushroom, My Adventures with "The Blob", he warns that Kombucha hasn't had in-depth studies to show it's positive or negative health effects.  It contains usnic acid, which has anti-biotic effects.  Stamets warns that frequent consumption of Kombucha could have similar effects as over-use of anti-biotics.  Namely, killing off beneficial bacteria in the body, and naturally selecting the harmful bacteria that can tolerate the unnatural conditions and become especially adapted and difficult to treat.  For those reasons, I cut back my consumption to about 1 cup per day at most, which is the maximum that Stamets recommends to drink.  Stamets also warns that the sugary environment necessary for brewing Kombucha invites other, potentially harmful bacteria to grow.  All Kombucha brewing information that I've found stress the importance of inspecting the SCOBY regularly for signs of infection.

I've heard that the history of Kombucha is a mysterious one.  It's said that Kombucha was discovered in Asian monastaries in the mountains.  Apparantly monks would brew Kombucha, and had passed down the culture of bacteria and yeast from brewer to brewer.  Whatever the history, it's an intersting drink, and a fun experiment! 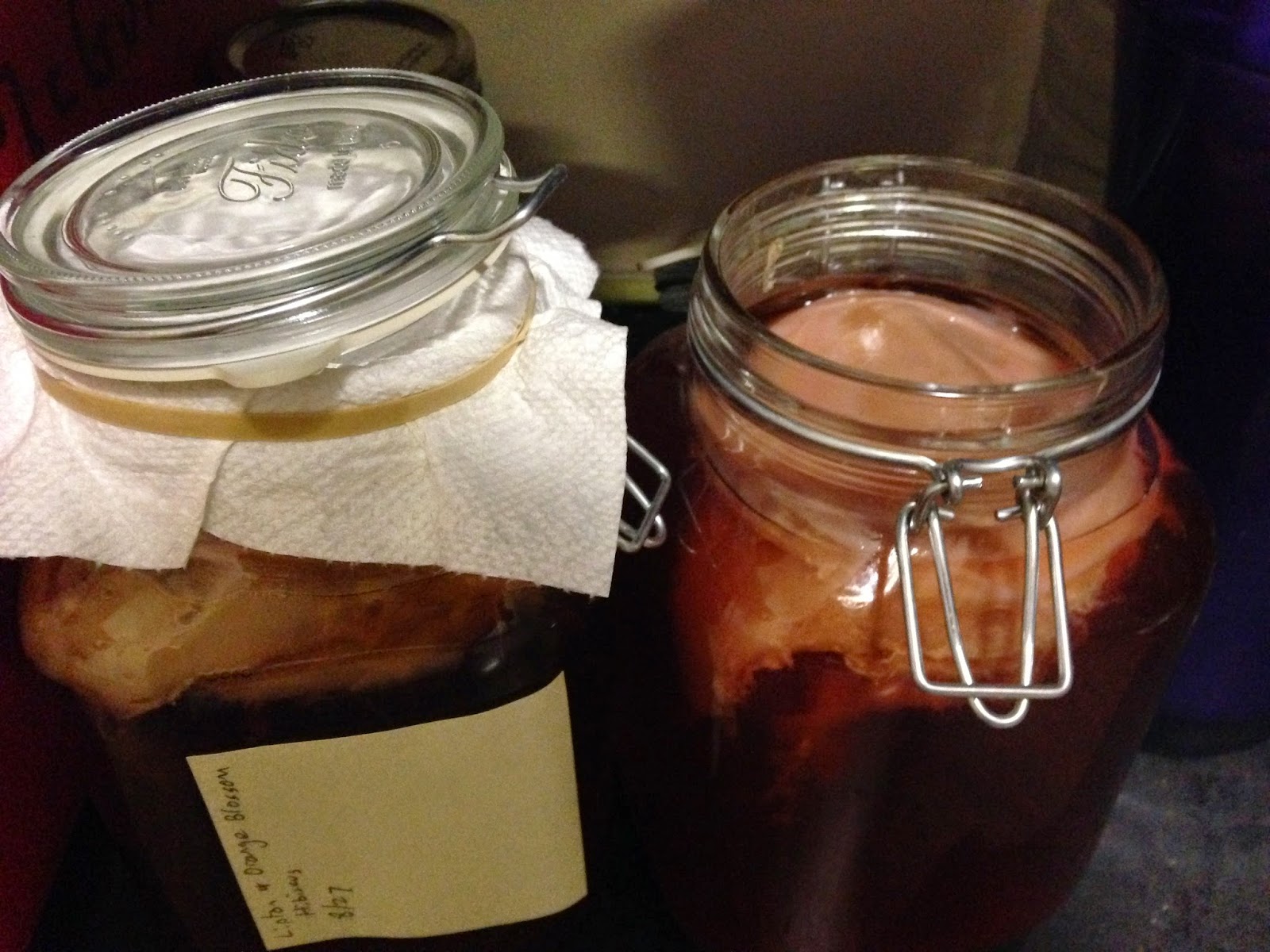 The kombucha ferments in a jar for 7-10 days. 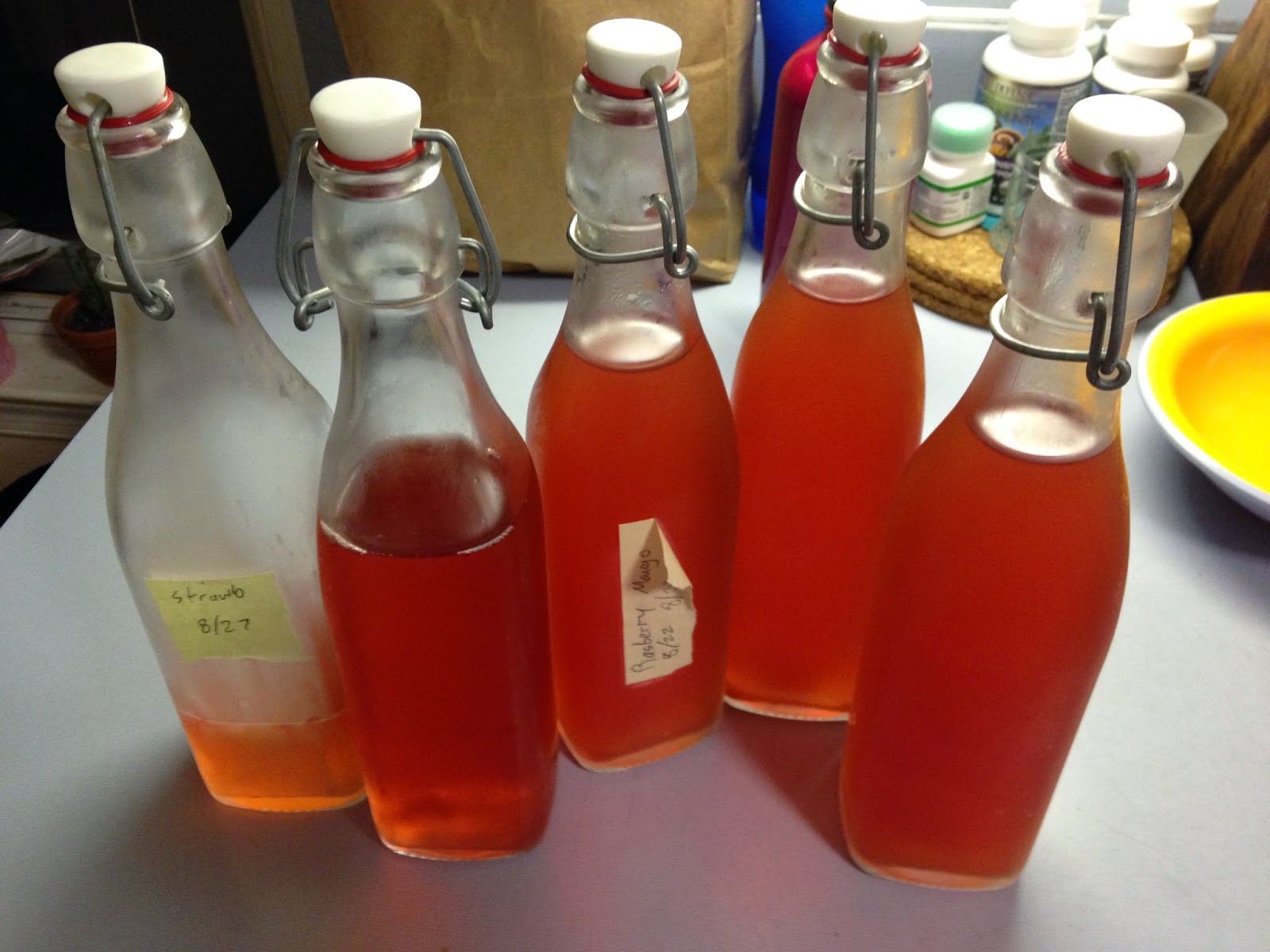 After the initial fermentationn, it is bottled, and then fermented again at room temperature for 2-3 days.  During this secondary fermentation, fruit and herbs can be added to infuse flavors into the brew.  After 2-3 days, it goes in the fridge and is ready to drink!

Here's a How To guide to brewing Kombucha at home.  And if anyone wants to try this out, let me know.  I have extra SCOBYs that you can start with!
Posted by dirkmcgurk@gmail.com at 9:13 PM No comments: