Advice on Aquaponics from a Hydroponics Expert

Recently, I spoke with a hydroponics expert, Dan Sypolt from Garden Indoors, a hydroponics store in Bristol, PA.  I had come to the store to buy 190 liters of expanded clay grow medium for the 105 gallon aquaponic system for my friend's apartment.  Instead of just selling me their product, Dan really helped me decide upon the best way to approach the system that I'm working on (I ended up not buying anything at that time).  He brought up some great points that I don't hear being discussed very often in aquaponic forums that I read.  His advice has led me to re-planning the system I'm building, and I think it will be a more robust system with this new design.

First, Dan suggested that typically, hydroponic systems are only flooded with water around 4 times during daylight hours.  My windowfarm had been trickling water 24/7 which over-watered my strawberries.  I have read many suggestions for a 15 minute flood, every hour.  Dan suggested that this was probably too much (at least from a conventional hydroponics perspective).  I'm going to start the new system with a 15 minute flood every 3 hours, and see how it works out.  The less pumping, the more energy saved on electricity. 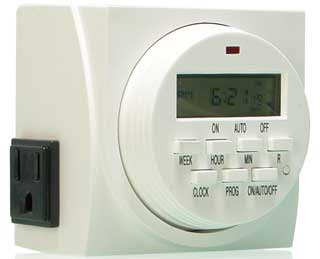 You might be thinking that flooding the system every 3 hours will not provide a moist environment for the bacteria to grow in my media beds.  This leads me to Dan's second suggestion.  In the store, there were several hydroponic setups that were similar to my aquaponic setup, except that instead of having one large grow bed filled with media, the grow beds were holding potted plants, and the grow pots were filled with media.  This used a lot less media than filling the entire grow bed, which will save you money.  The grow bed is essentially acting like a flood table.  This allows you to move the plants around easily without disturbing the roots.  You can also remove plants easily, and it also makes the grow bed much easier to clean.  All the solid waste that builds up in the bottom of a grow bed can be a smelly pain in the butt to clean.  This isn't a problem with this setup.  You don't have to worry about media guards for your plumbing, because the grow media never touches the plumbing.  The flood table would look something like this: 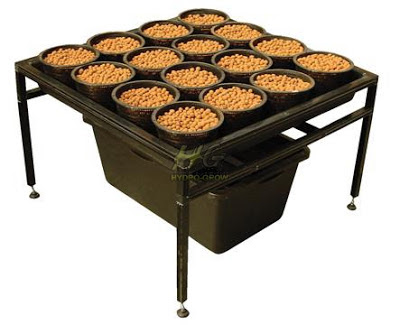 Now, you may be thinking, "What about filtering the water? What about the bacteria?"  The grow bed in a flood and drain system typically acts as a filter for solid waste, as well as the location for bacteria growth, essential to aquaponics.  If the water is not being pumped into the grow media, than where is the bacteria growing, and how is the solid waste filtered.  For this, Dan suggested using a typical aquarium filter.  There are several filter types available. If you're using an aquarium, a hang-on-back filter is fairly inexpensive, but may be less reliable than other filters. 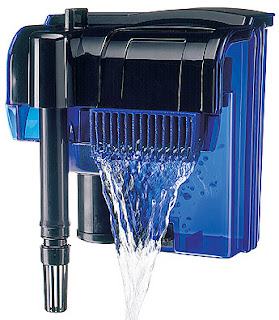 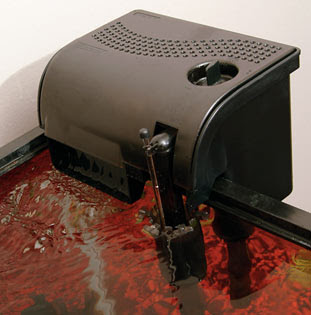 A canister filter is usually a little more expensive, but more durable.  I've chosen to use a Canister Filter for the 105 gallon system that I'm building (pictured below). 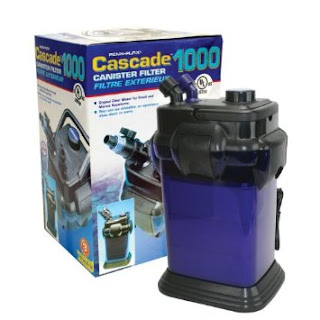 Another filter type that Dan mentioned was a Wet/Dry Trickle Filter.  This is like having a separate, smaller media bed specifically for growing bacteria.  It can be attached to an aquarium, but they seem very bulky.

The filter that Dan suggested would work best is a Fluidized Bed Filter.  These are highly efficient biological filters that have enormous bio-load capacities and take up very little space.  They are similar to a wet/dry trickle filter with extremely small media (typically sand), but air is pumped into the media causing it to flow around.  This flow causes the bacteria to be "bumped off" the sand grains, and more bacteria grows in its place.  Bacteria can adapt very rapidly to increases or decreases in bio-load.  With such a small media, the surface area is huge, allowing for an enormous amount of beneficial bacteria.  Here's a cool video to demonstrate how it works.

So, with all this in mind, I think this is a better way of designing a flood and drain aquaponic system.  The canister filter cost me about $100, but I'm saving at least $80 that I would have spent on expanded clay pellets.  I haven't researched the other options extensively to write about all the pros/cons of different filters, but the canister filter seemed durable and efficient.  As for the system design change overall, I think that the pros outweigh the cons.  What do you think?
Posted by dirkmcgurk@gmail.com at 12:13 PM